If I'm trying to describe my mini work atmosphere over the last week or so, I'd be using words like chaotic, scattered, disorganized, interrupted and uncharacteristically unsystematic. I mean, just as I would think I found my path and a direction to dedicate myself to, I'd remember some other important tasks that needed doing first. Trying to communicate my process and photos into a linear and understandable timeline will be challenging, but here goes...

I started off with the best intentions to get the staircases completely finished. I replicated the arch cutout in the stairway railings in Tinkercad, along with some fancy "carvings" so I could add a bit of dimensional detail. I got them printed and applied to the staircase railings.

I kept going with the stairs, adding trim and wallpaper, painting, aging, and dry fitting a bunch of times to help the fit or mark for ceiling paper and flooring. I also scanned one of the papers from the Grand Hotel paper pack, a stripe, printed it onto cotton, then made runners for the stairs. A stripe on turning staircases was probably a more challenging pattern than a floral would have been, but I think it came out fine. It has the same colors as the wallpaper, and I love it when florals/patterns/stripes/gingham match in a room.

It seemed like a good time to install the wallpaper to the entry/second floor hall. The sister paper to the stripe in the Grand Hotel pack was a floral that I really loved, but the scale was just way too large. I decided to scan it, reduce it, mirror it and print it onto matte photo paper.

Despite trying many settings and color adjustments on my printer, I just could not capture the worn/aged patina of the original. So, to make lemonade, I installed it, sealed it with Mod Podge Paper (which still blead the ink if I wasn't super gentle and tried not to go over the same spot twice) and then applied a brownish/yellow age wash. You can see in the photo below the paper between the window openings is not aged and the paper around it has been. I really liked the effect - it's totally in keeping with the time worn look I have envisioned for this project.

To finish off the second floor staircase so that I could install it, I had to create the separation wall to the bedroom, paper it, add the stair stringer and trim and attach it. 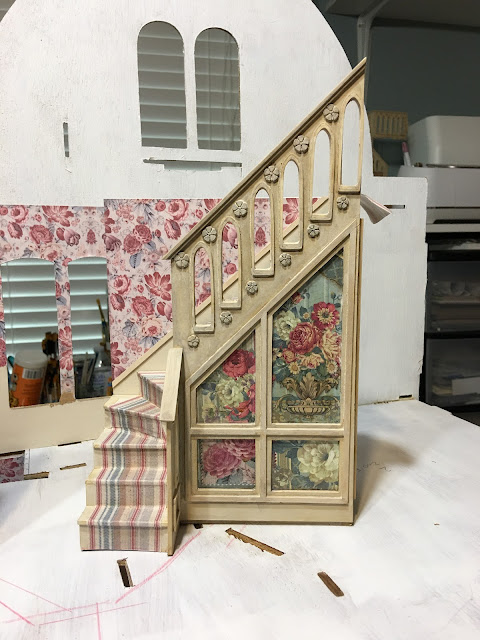 Then the bedroom side needed trims, painting and aging. I left room at the top and bottom for later baseboard and crown moldings.


Russ lent me some long bar clamps so that I could get the staircase glued in and have the front wall and floor at perfect 90 degree angles. Sorry, there aren't any photos - I was pretty scattered!

Getting the staircase glued in was an essential step in creating the new walls and doorways to the bathroom/bedroom. I also had to install the wall separating the entry from the kitchen first.

With the staircase installed, I could get accurate angles and measurements to create the new walls/doorways for the bathroom/bedroom. After looking at the kit's original plywood wall with tabs and doors cut into it, I decided it would be easier/cleaner to cut the new walls from illustration art boards. When doubled, they are just about exactly as thick as the kit's plywood.

Once I knew what widths the doors would be, I cut the walls for the doorways. Once they were cut, and I knew how wide the doors and the frames had to be, I could create them in Tinkercad. But what style? I did some poking around to look at second empire interior doors. There were lots of styles to choose from, but I really liked this Divided Arch door from an This Old House article talking about choosing the right doors for your historical home. This door echoes the long, tall arched windows in the kit without having to be curved itself and therefore hard to hinge. Of course, I added extra details in keeping with the rest of the features in this house.

I printed an inside and outside frame for each of the doorways. I also printed the doors in an inside and outside half so that the door is flat on the print bed. It is easier and cleaner to glue the sides together than to add support for the recesses and then clean it up after the print. I used the frames as the pattern to cut the door openings in the new walls. 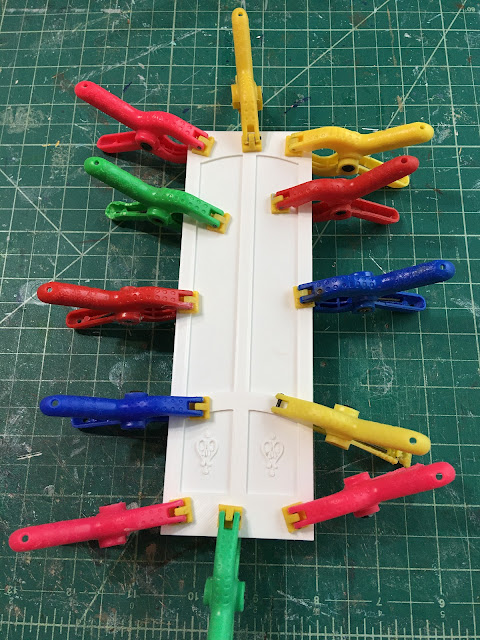 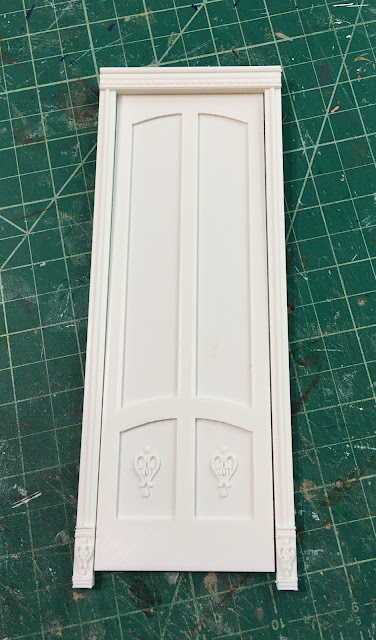 When the exterior door frames were glued to the angled walls and the openings cut, I was able to glue them into the house. The bedroom's angled door wall was attached to the stairway wall, the bathroom's to the kit's entry/kitchen/bathroom dividing wall. This totally changed the angles the doors had to be placed at, so a new separating wall and dividing wall had to be cut. Once these were all tied together, they were stable and strong.

Here is what the doors look like printed and with a coat of paint. To hinge them, I will use pins: the top pin will be recessed into the door and into the wall, covered and secured by the interior door frame. The bottom hinge will be placed in a recess drilled into the floor. But I must complete the flooring first, so it might be a few steps down the road.

My next steps will likely be to get all the wainscoting and trims installed in the entry and upstairs hall. Once that is finished, I can install the first floor's stairs and it's exterior wall. It's going to be a custom, piece by piece operation, and who knows what I'll remember that I forgot. I did get the entry's flooring, ceiling and ceiling rose installed. With a little luck, it might just be ornate enough for second empire in my next post.

Lighting for this project is going to be another challenge. I will have to not only use up the 12 volt dollhouse lights that I have in my dwindling stash (and try to make them look second empire), but also come up with a few 3D printed fixtures to supplement. Test designs and prints to commence, soon. Looks like more disorganized progress is in my future, but what a fun adventure this is turning out to be!

P.S. If anyone should need the Willowcrest instructions, just click the link for a .pdf which you can save to your computer.