Our Willowcrest adventure continues, my friends, and this time it's all about stairs. Predominantly, the second floor stairs that lead to the third floor. Following the kit's instructions, the stairs are placed between the bathroom and the bedroom. Many folks who've blogged about the kit dislike the back wall of the stairs because it obstructs the view into the dollhouse and feels obtrusive. I could not agree more! So what to do about it? The solution, naturally, is to move the stairs. WHERE is the obvious conundrum. The hallway on the second floor is tiny, so it doesn't leave a lot of options. Unless you are willing to start moving walls around, which I totally am! 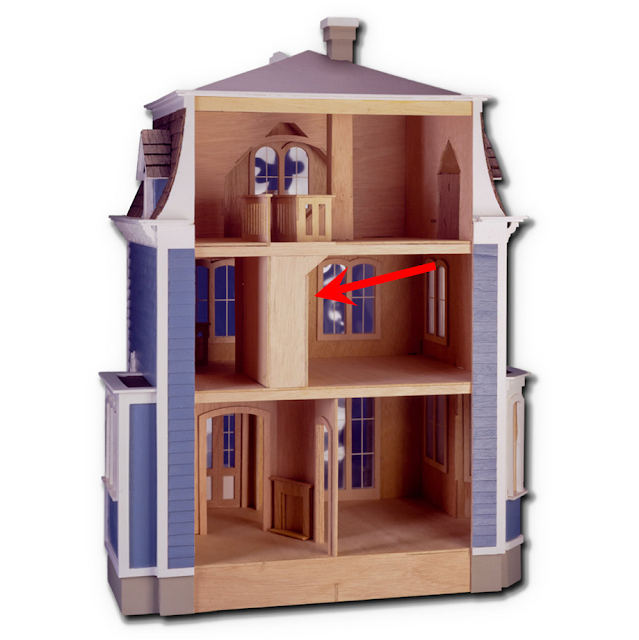 Okay, it feels like I need to set the scene here a little bit. Please indulge this wordy paragraph...

It might seem like there should be other priorities before I start thinking about stairs. Such as gluing the front wall to the center wall and to the foundation (like I said I would in my last post). And you are right. But... for the sake of efficiency, I thought I should have the 3D printer working while I was working. Teamwork, right?!? In that case, I had to figure out what 3D printed pieces I needed next: the upstairs bathroom/bedroom doors. But before I could make them I had to know their dimensions. And to know dimensions, I had to know where my walls were going to be. That meant I had to figure out exactly where the stairs would go. Chicken and egg conundrum every time! So, I sat and stared at the dollhouse, while still in dry fit, hoping it would pity me and just give up the answer. You know what?!? It did! Just for kicks, I stuck the first floor's stair assembly in the second floor hallway to see what would happen. Guess what? It was a perfect fit!!! I think my angels are feeding me ideas! And, not surprisingly, those ideas lead me down a rabbit hole... 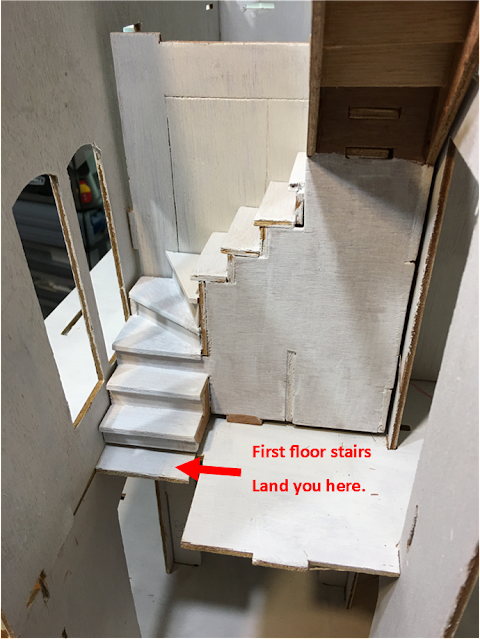 I needed an additional 2-1/4" to make this plan functional. I decided to see if I could steal that space from the bedroom.

How would it look? How much room would that still leave the bedroom? The only way to answer these questions was to put some eyes on them. I got out my red pencil and ruler and marked out an idea. The stair wall would jog into the bedroom 2-1/4" x 6-1/8", then jut back out for the doorway. 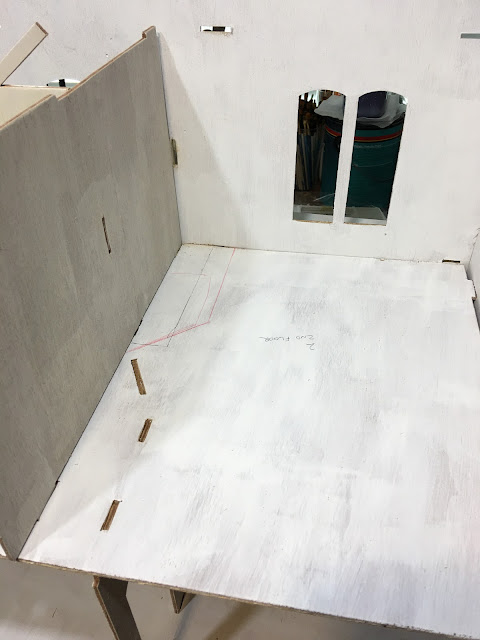 I kept going with the idea, drawing out the new walls in red pencil. The benefits of the configuration below are:

a) The original bathroom layout won't lose much space

c) it will still leave plenty of functional bedroom space

d) it opens up the back of the house

The stair opening on the third floor will be only slightly farther into the room and to the right. I'll just have to adjust the access hole. I will also have to cut new walls, but I might have just enough material if I use the original bedroom/bathroom wall and the offcut (you'll see this later) from the bathroom wall. If I'm short, I can use illustration art boards and double them up if need be. 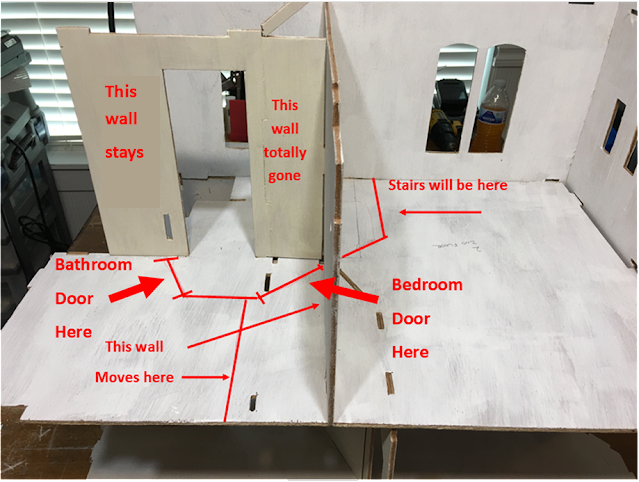 I was so energized by this solution that I couldn't sleep! Instead, I got started replicating the staircase in Tinkercad. It took three hours to work out the design, but finally, at 1:00 AM, I had gotten this far and sent myself to bed. 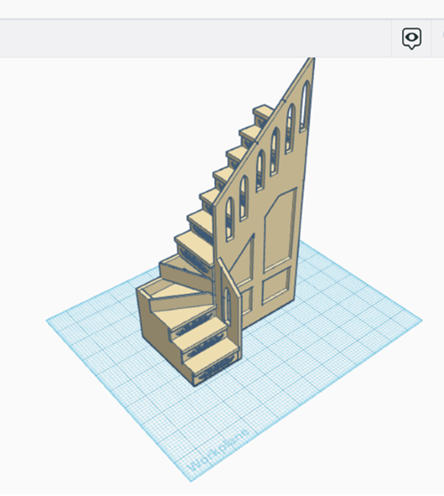 Just when everything seemed to be falling into place, I was terribly shocked the next morning by bad news. The slicer program calculated that it would take 4 DAYS to 3D print the staircase!!! And that didn't include the railing. I would be risking a lot of time and material on a prototype that I had no guarantee would work.
Um, back to the drawing board... 😒
I don't give up easily, and that's when another solution came to mind. Since I already had all of the pieces designed and measured out in Tinkercad, I could export them as svg files for Design Space and cut them with the Maker. I would just have to pull the 3D pieces apart and flatten my model. So that's what I did. Chipboard? PLA? I don't really care, just give me my stairs!!! The chipboard option means I had to assemble the stairs myself, but luckily, I really enjoy that kind of "work". 😊

Assembly was accomplished in a very straightforward process: Glue back, sides, braces, front, risers and treads - the same order as the kit's stairs. The three steps that create the turn were a custom, piece by piece job, but it, too, was pleasantly simple thanks to chipboard being so much easier to cut than wood. 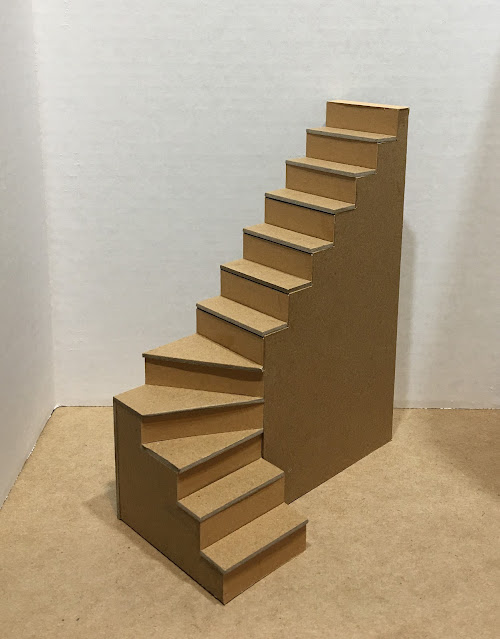 Before I could get an accurate visual on how the stairs would look in the hallway, I had to do a little remodeling. The kit's original bathroom wall had to get cut down. I used my Zona saw and made quick work of it.
Here's how the new staircase fits into the hallway pushed back into the bedroom 2-1/4". There's sufficient room now for choosing to go up another floor or off to the right to the bedroom/bathroom. 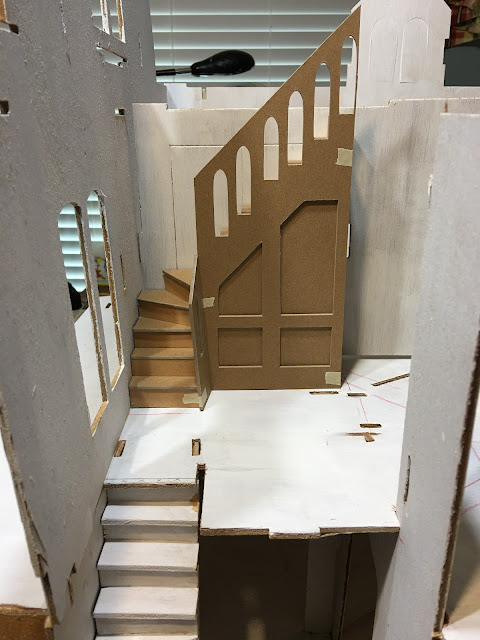 Both staircases sitting in their places. 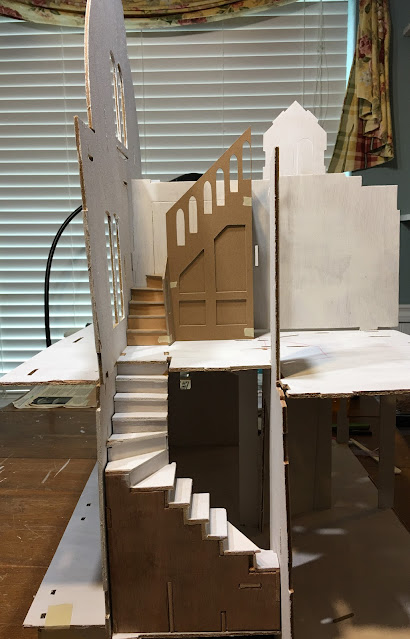 And the view from the future bathroom/bedroom doors. 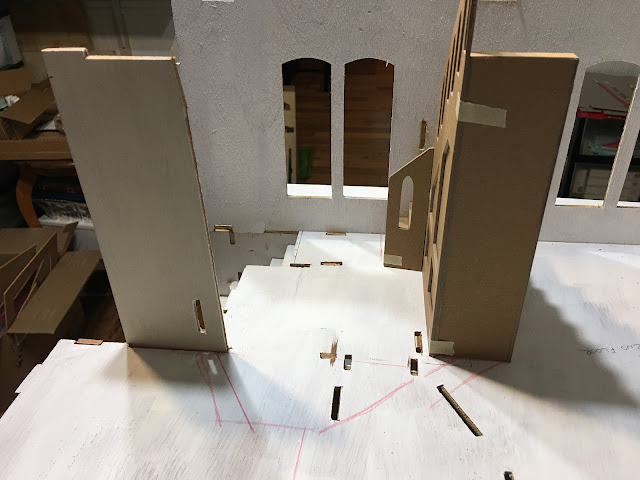 And that, my friends, was this week's Willowcrest adventure! Good news, bad news, good news, triumph! Man, I'm having fun!
xo xo,
Jodi
Posted by Jodi Hippler at 12:00 AM