In the post before last I'd shown you that I added extensions to the walls to make them about an inch and a half higher. Once that portion of the build was done it was time to move on to the roof/ceiling.

See the groove in the floor at the front of the room box? That is to hold a piece of plexiglass to protect the things displayed inside from dirt and dust. Originally, I had intended to make the front half of the roof hinge open so that the plexiglass panel could be lifted up and removed. But in a "Senior Moment" that I'll explain later, that was no longer an option. I'll share the new plan for removing the plexiglass in a later post on the main structure. For this post, in the interest of not hogging all your blog reading time, we'll stick to the ceiling/roof. 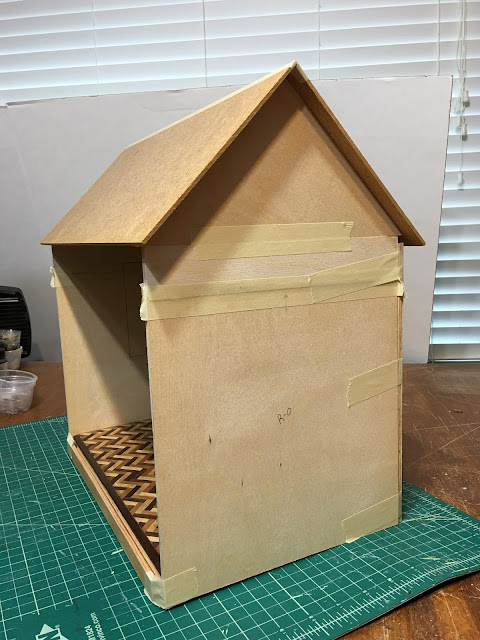 Although I knew I would be installing lighting in this project, I thought it would also be nice to bring more natural light inside, too. So I cut holes in the front half of the roof for skylights. 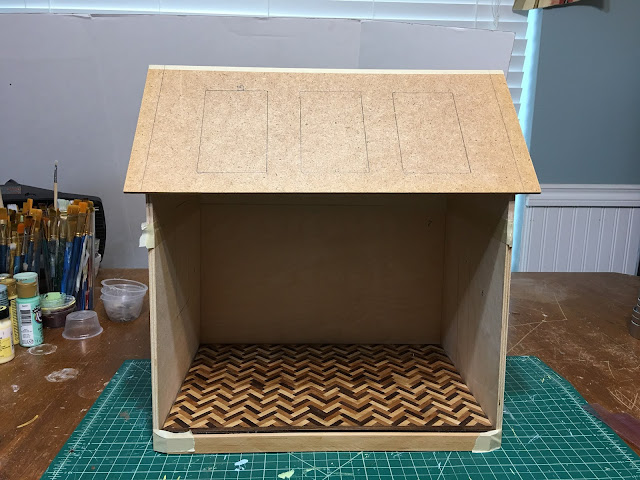 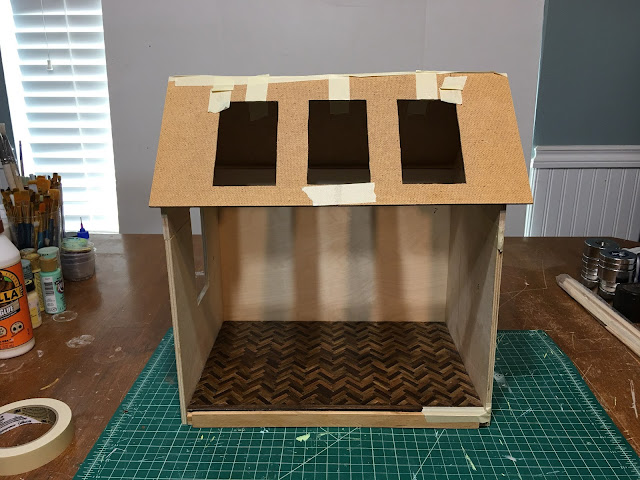 While I had the scroll saw out and was already making a sawdust mess, I thought I better just cut the sink window opening, as well. More on that in the next post. 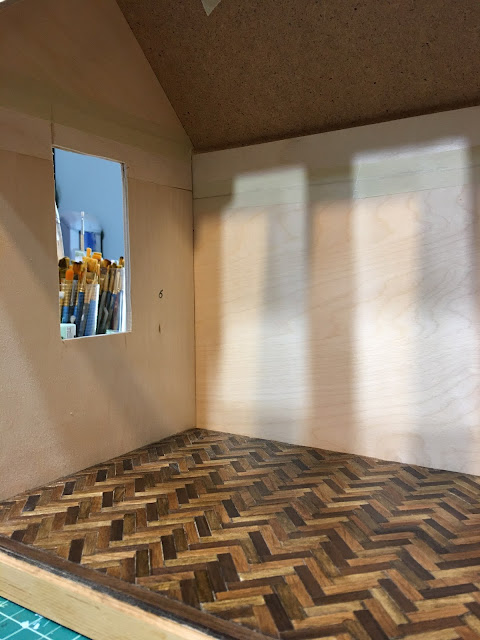 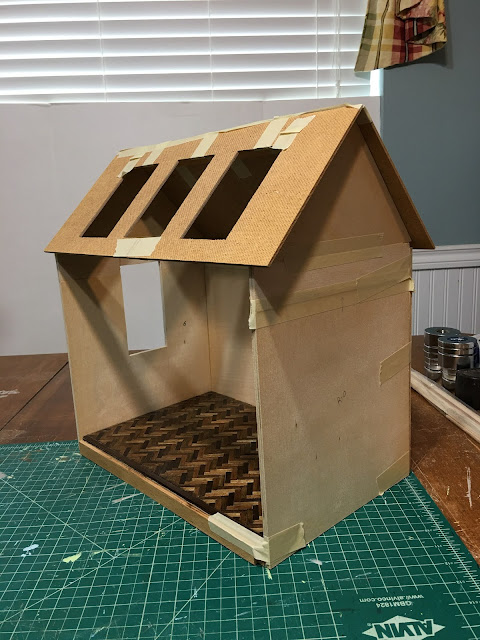 For the inside of the ceiling, I planned on leaving it vaulted with exposed cladding and roof trusses. As if the kitchen were in an old house that had been updated, but also embraced the home's history and the workmanship of an era gone by. Both Tasha and I appreciate Time's Patina, and when played off of more modern fixtures, magic happens. I am no expert on aging miniatures, but I gave it my best shot on the ceiling.

I painted a rough coat of 3 parts water to 1 part brown paint onto 1/16" x 1/2" basswood (both sides to prevent curling). Once that was dry I applied a light coat of white to one side. This is the same method I successfully applied for the shiplap boards in the Display Shop project. 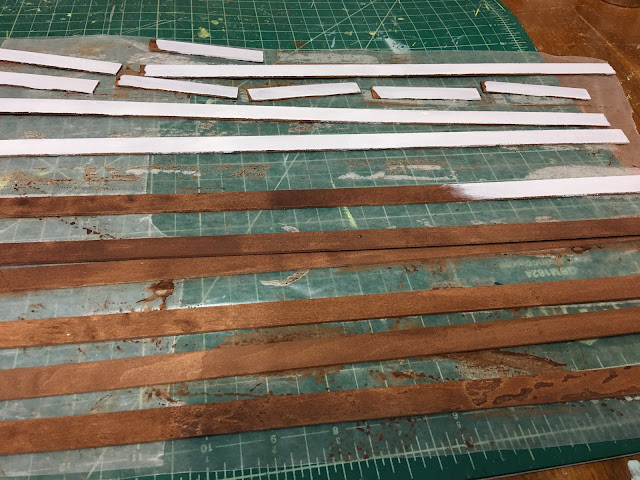 Once dry, I lightly sanded until some of the white paint chipped and revealed some brown paint beneath. This was the look I was going for.

To begin laying the cladding onto the ceiling, I first needed to join the ceiling with the 5/8" square beam that came in the kit. This is where I forgot that I needed the front roof panel to remain free so that I could attach a piano hinge. Instead, I plowed ahead and glued both roof pieces to the beam. I only realized my mistake after I'd already applied several of the cladding strips, too late to be undone.

Not to worry! "Senior Moments" don't have to be followed by "Charmin Moments". I calmly thought through the problem and contemplated ways I could still have a sliding plexiglass panel. In my next post I'll show you the solution I figured out that will still allow the plexiglass panel to be removed. 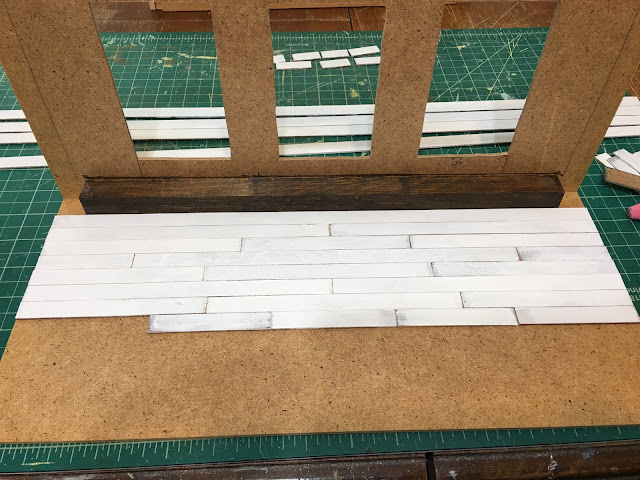 Once I had all of the cladding applied, I needed to come up with material to make the roof trusses. I had ordered some material in anticipation of the task, but it was not meant to be. The company is new to ecommerce, lost the order, was backordered on the product anyway, and ultimately issued me a refund. So this is where Russ, the handiest and most helpful husband in the world, came in.

I informed Russ of my dilemma. You see, I have only mini sized wood and molding in my stash, and some plywood. But not anything 5/8" square and not enough of any scraps to do the whole job. And nothing that looked like old timber. But Russ has a real workshop in the garage and had some leftover oak trim from a job. He also has a nice, real sized miter saw that he used to cut down the very hard oak. First, he made it 5/8" x 5/8". And then, going off my diagram, he cut the wood to size and with the angles I needed. All I had to do was sand, stain and install! 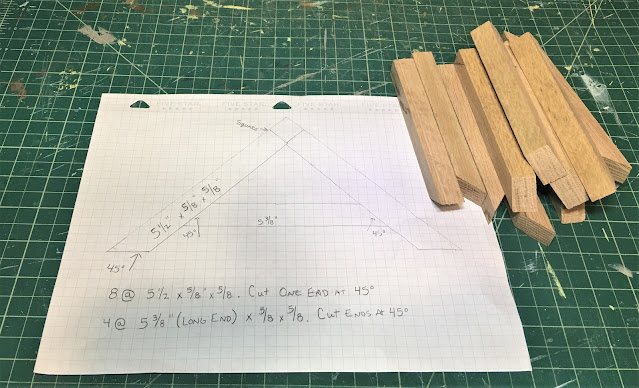 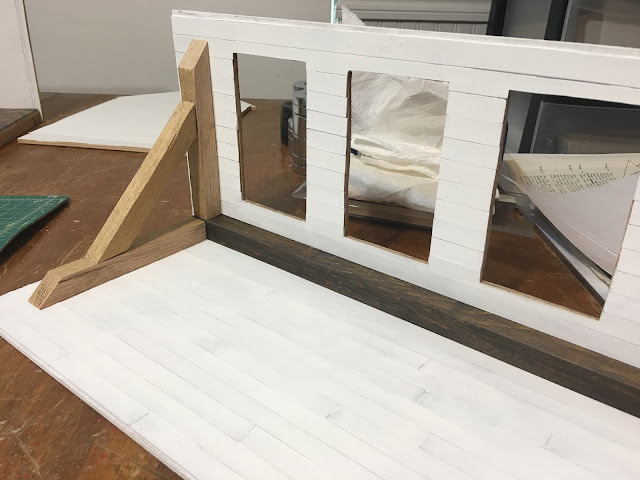 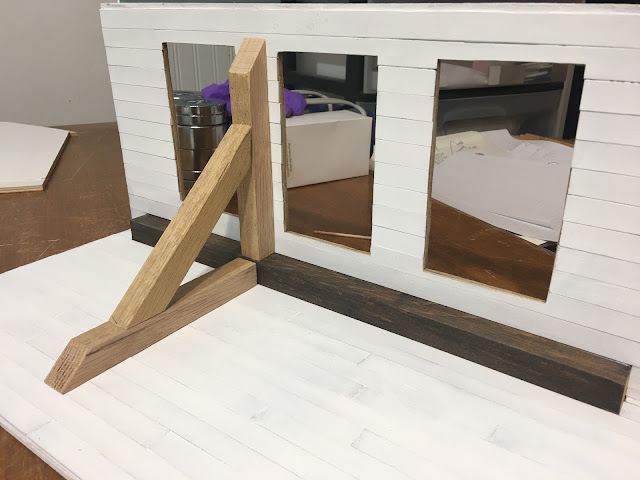 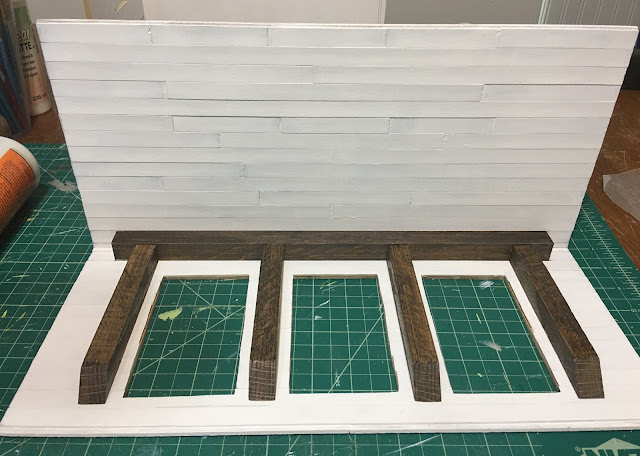 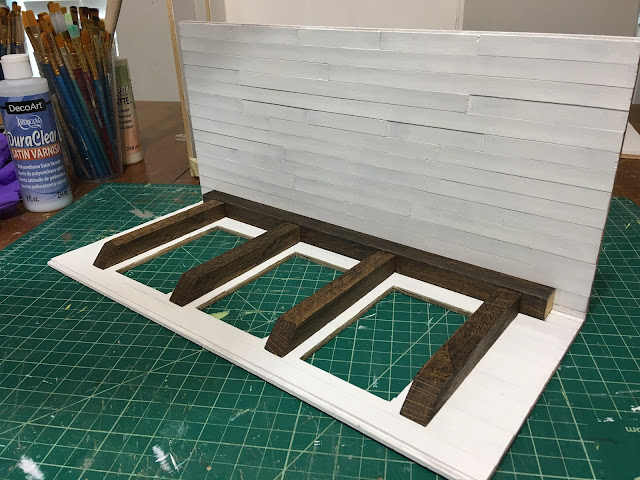 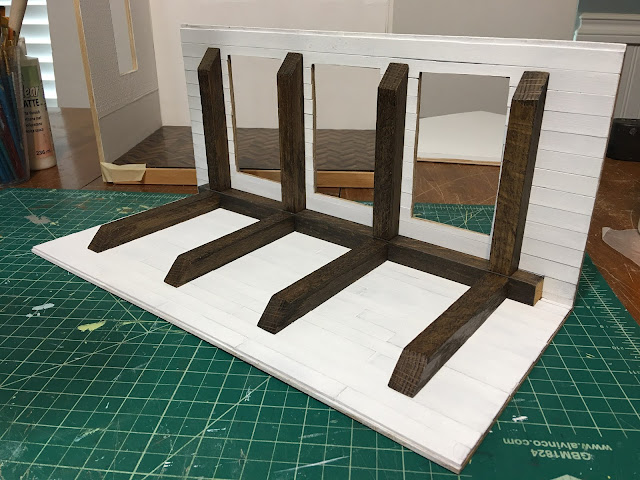 Once the beams were in, I cut "iron" straps from kraft board using the Cricut. I cut the fastener flaps off silver metal brads and used them as the bolt heads. 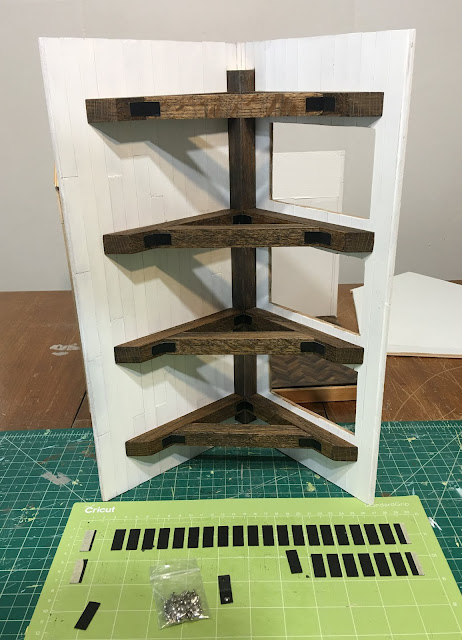 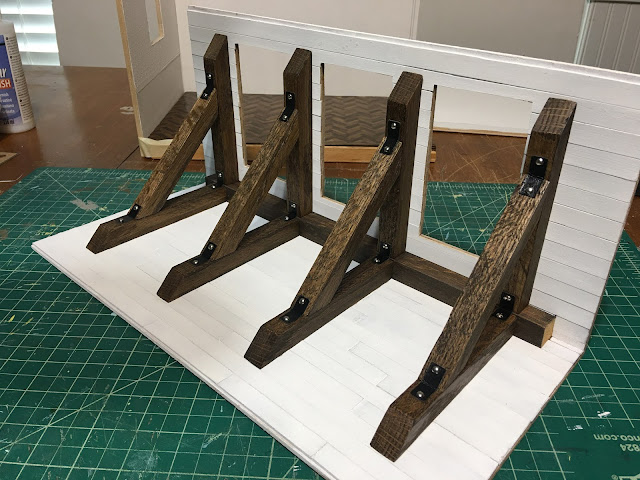 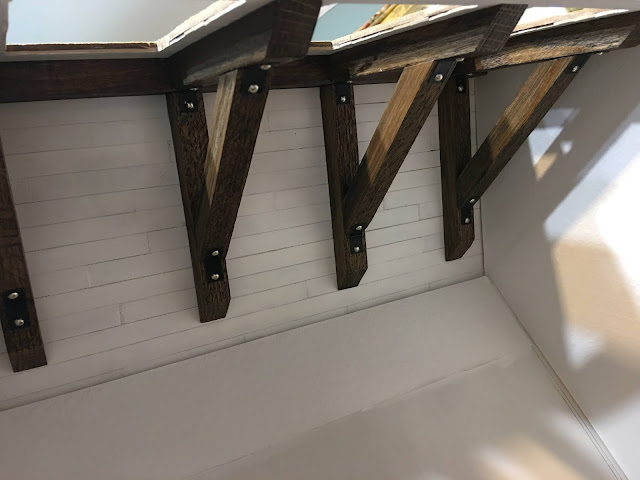 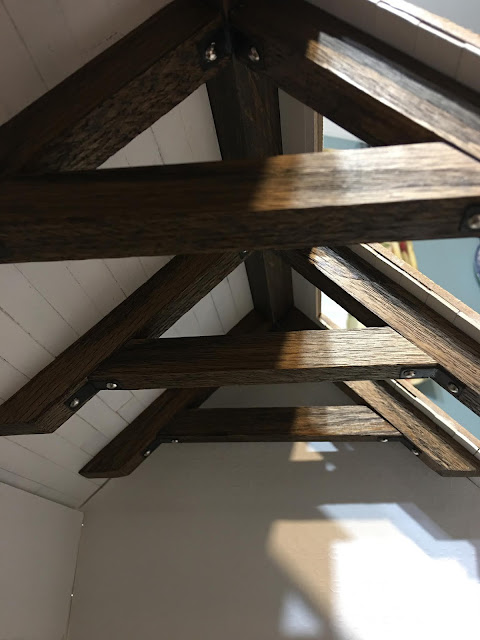 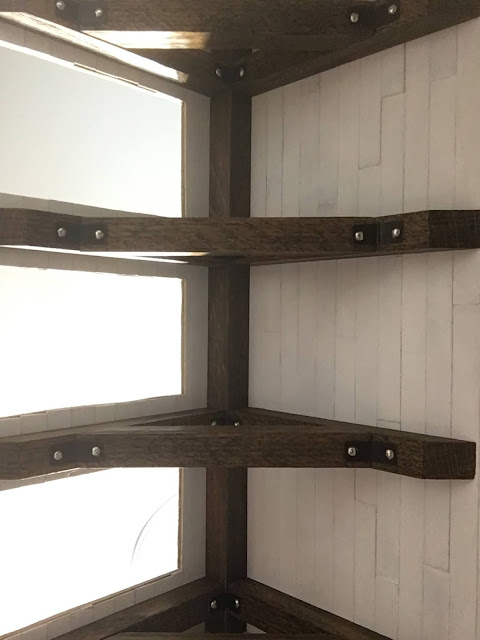 And a peek through the skylights... 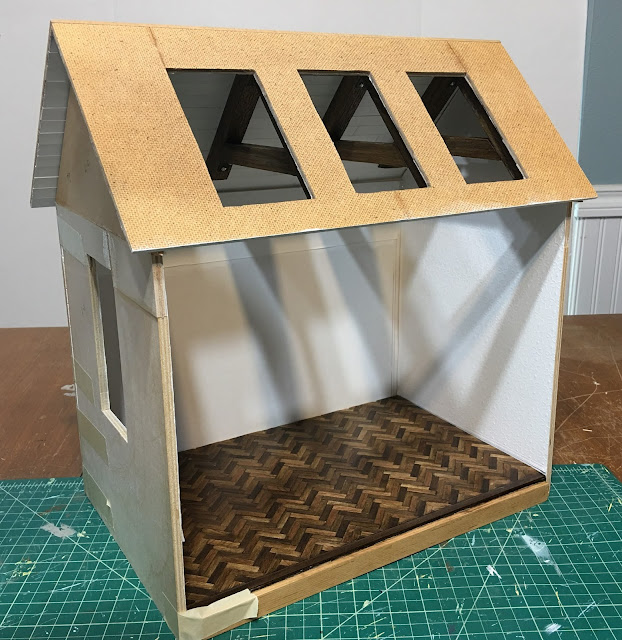 The last thing I could do on the roof/ceiling for now was to install the lights. I am using all LEDs in this build from Evan Designs. The ceiling will have six can lights, and possibly two additional pendant lights later on. Those I will try to create and print with the 3D printer. So for now, the 3mm bright white can lights with mounting clips are all I had to install.

I was originally going to mount them right into the ceiling. Due to the angle of the ceiling, the concern that they would give an irritating glare through the skylights and that the roof itself is only 1/16" luan, I decided to install them in the beams, themselves. This was really tricky, because I had to drill deeply enough to allow the mounting clips to seat, but then also at an angle so that the wiring could be concealed all the way through the beam and out through the roof. 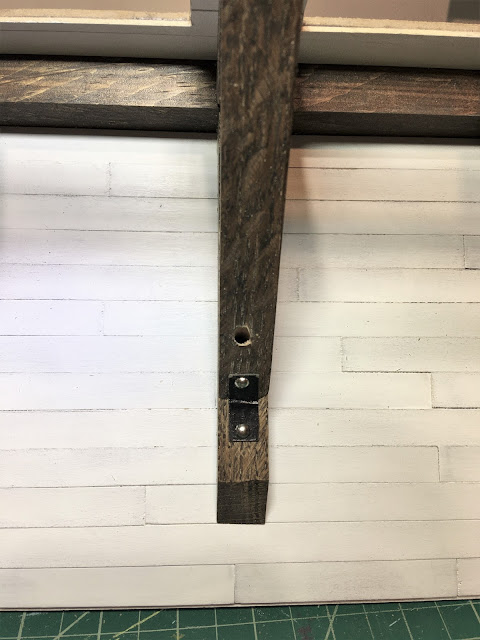 Some came out better than others, but luckily, they are barely visible while looking through the front opening, and not at all visible when peering in through the skylights. What I am after here is good lighting, and I think I've achieved that. Phew! I have tested each individual light but still have to test them in the room at the same time to make sure I have enough. With supplemental cabinet lighting, and a few fixtures, Tasha will have plenty of light to play. 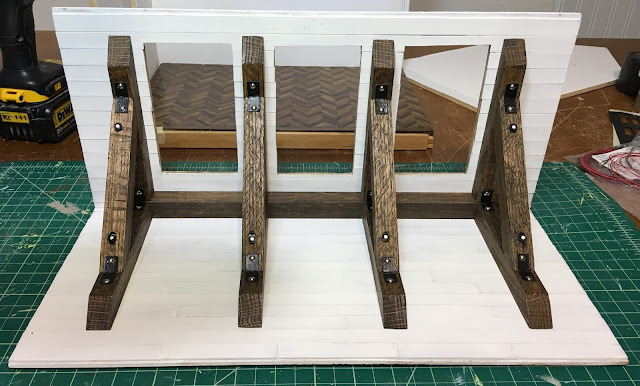 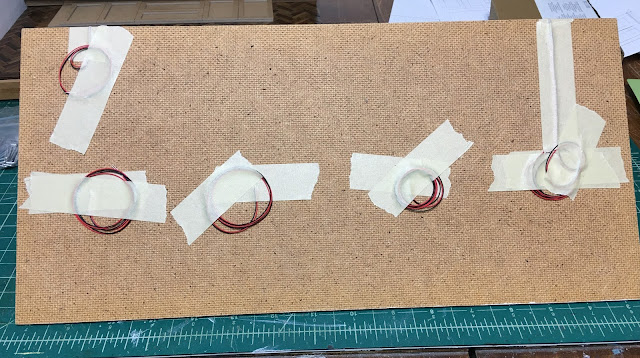 I am relieved that I don't have to worry about the roofing shingles just yet. I can procrastinate on that for a while. But if ever the corner trim shows up, I can begin making the skylights. Until then, walls, wall treatments, cabinets here I come...
May your "Senior Moments" always be followed by clever solutions, dear friends!
xo xo,
Jodi
Posted by Jodi Hippler at 4:11 PM