Some of you long time readers know that my obsession with miniatures came sometime at the end of the last century. In secret, I was decorating and furnishing my daughter Natasha's first real dollhouse. I'd drop the kids off at school, rush back home, pull it out of it's hiding spot (under a cloth tarp in the laundry room's crawl space), and get as much accomplished during those school hours as possible. Christmas was coming up fast, and I was so new to every aspect of dollhousing. Wallpaper, trims, flooring, furnishings - what a dream! The house came as a pre-built plywood, two story structure with six rooms and a tiny porch. So much to do! Those short hours passed so quickly, and before I could believe it, it was time to hide it back in the laundry room again. Christmas came, she loved the dollhouse, and the whole family got involved in finishing the rooms and making little things to furnish and decorate with. But what a gift for me, too! I was left obsessed with an amazing and all consuming hobby. The rest, they say, is history...

Not long after Natasha got the dollhouse, she grew out of playing with it. That was the end of a short era for her. Now she's all grown up, 33, and while she likes to look at my projects and marvel at their tiny wonder, she has a busy life and has not been overly excited about miniatures. She's wonderfully encouraging and supportive of my interest, but hadn't shown a desire for her own to play with. Until recently.

There's a magical time in the lives of our adult children when they begin spending their weekends at Home Depot, improving their living spaces and becoming full fledged adults. Her texts now regularly include photos of furniture, design ideas and the style of kitchens she dreams of for her first house. The other thing to know about Tasha (as we call her), is that she is an amazing gourmet cook - something she definitely did not get from me!

Last fall, we started designing an imaginary kitchen for her, saving and comparing ideas and helping her to narrow down and identify her style. Meanwhile, I began to look for the perfect room box in which to create that kitchen for her in 1/12th scale. When I hinted that she may just get a mini kitchen for her birthday in July, she was immensely excited! And that, of course, made me extraordinarily excited! The goal is to give her a mini version of her dream kitchen. One that she can decorate for the seasons with tiny culinary replicas including fruits, produce, decore and wonderful mini cookware. It'll make giving future gifts so much fun! And maybe... She'll even go to shows with me!

To house these exciting ideas, I found a unique-to-me room box on eBay. It seemed to have just enough space inside for a well equipped kitchen without being too obtrusive a structure for a new-to-miniatures person. It had a unique gable roof - unusual for a room box, and would be fully enclosed with a polycarbonate front panel that could be removed to play, decorate and clean, if I hinged the front roof panel. 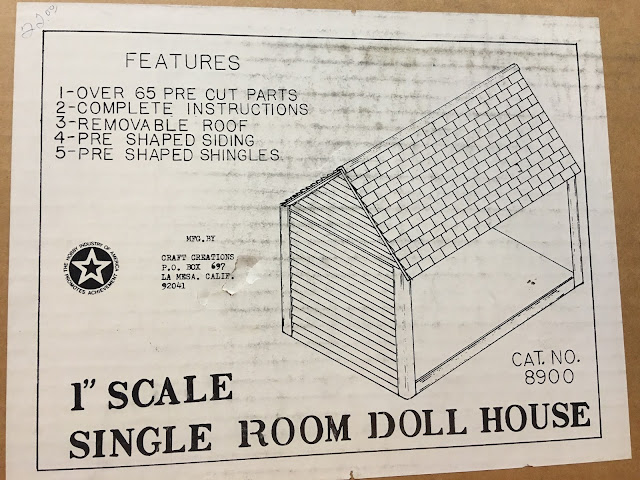 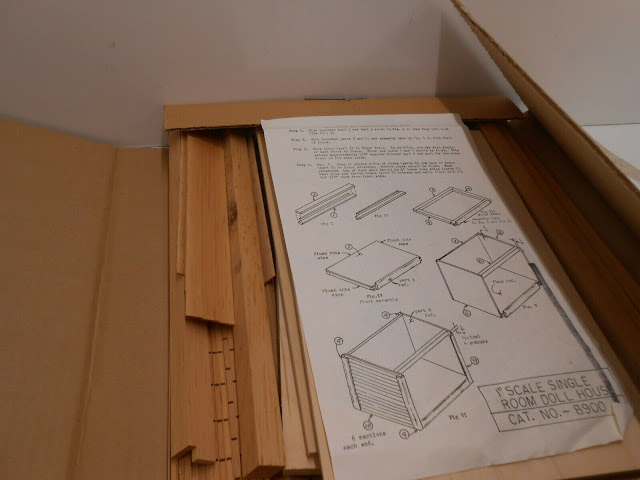 Initial plans for her room box include a number if things she'd really like to have incorporated into her dream kitchen. Like her mother, she is very practical, loves a combination of modern and traditional styles, loves function mostly over form, and appreciates subtlety over crudeness. She wants to be involved in the periphery, making key decisions as I need input, but mostly she wants to be surprised. I've shown her some elements and gotten feedback, but she's got instructions to keep away from my blog!

To be absolutely certain of the layout and sizing, I made graph paper drawings of the space - all three walls and the floor. The back wall, 14" wide, will include a central gas cooktop, built in double ovens, a glass front cabinet and open wooden shelving. 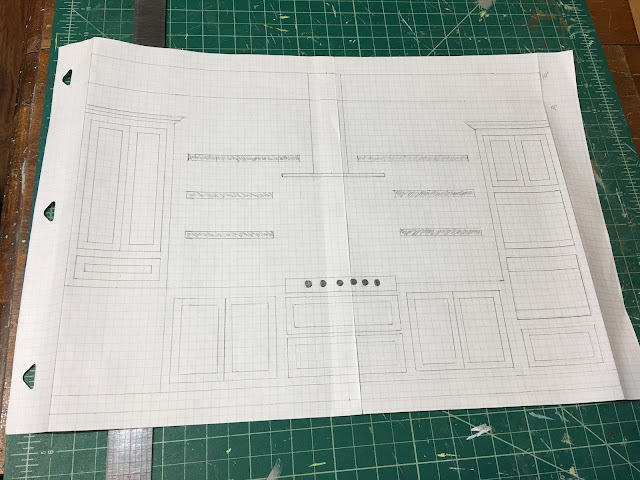 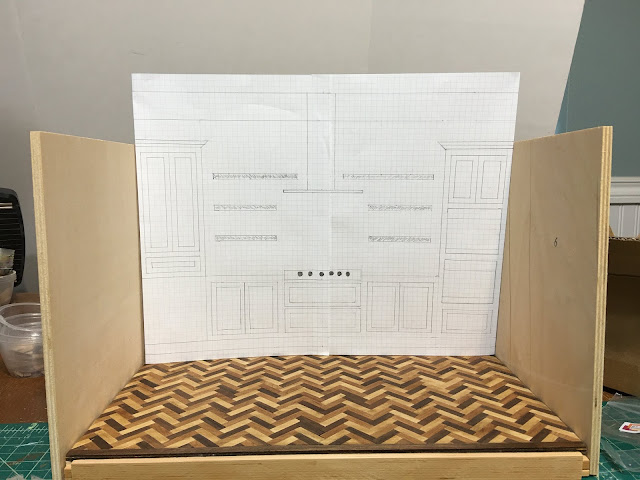 The left side wall, 9" wide, will house the sink, dishwasher and more open shelving. My first challenge, and an affirmation of why I like to take the time to plan spaces out on graph paper, was the window. At first, I thought using a very large, 5-1/2" wide x 5-1/4" high modern looking window would be good. After drawing it in and seeing it with my eyes, I realized it was too large and really dominated the space. 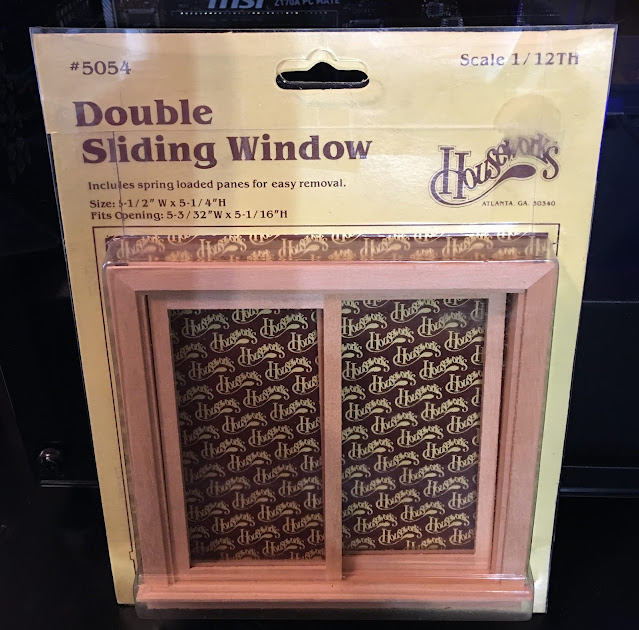 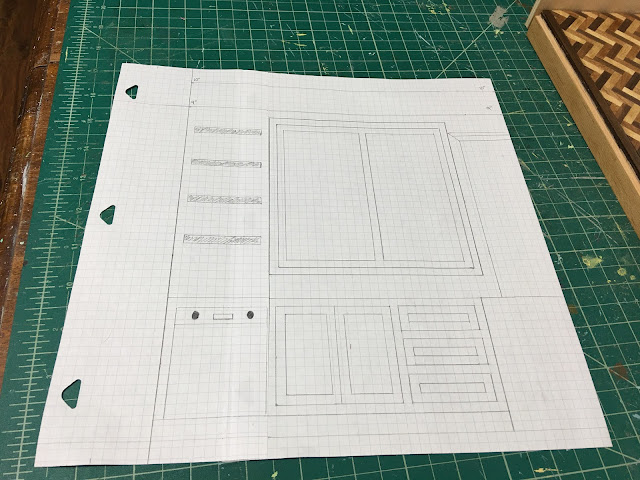 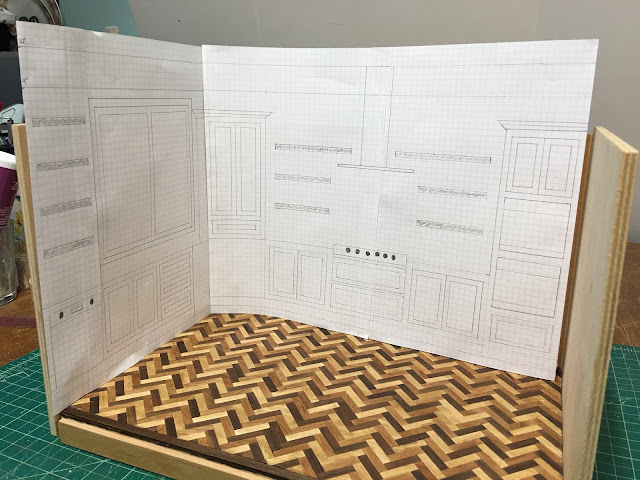 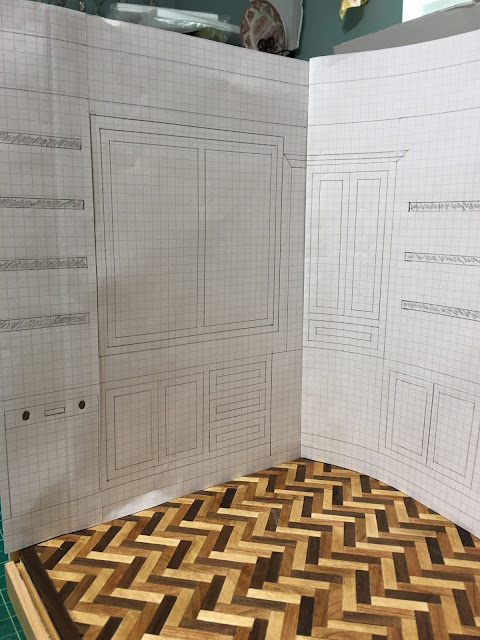 Using a smaller, single window, I was able to enlarge the open shelving a bit and came up with a lower cabinet design I liked better, too. This one centers the sink in the space. 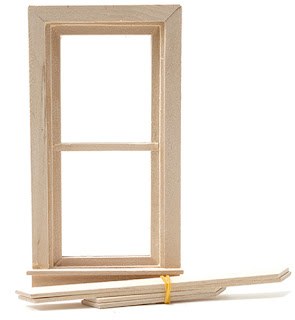 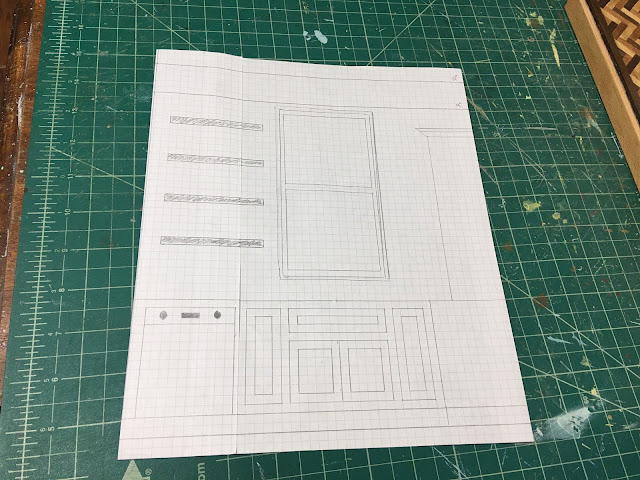 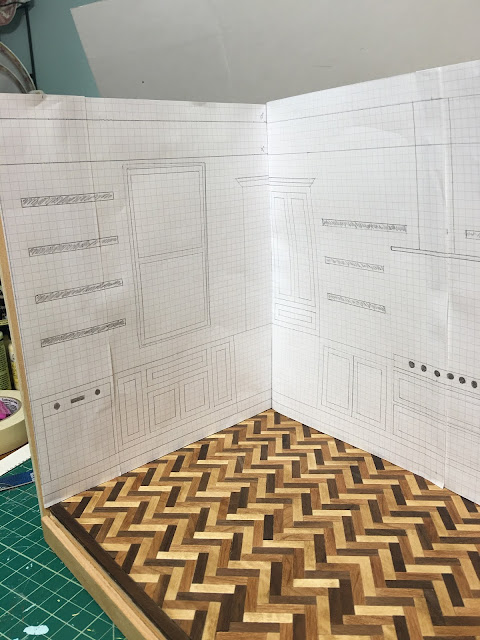 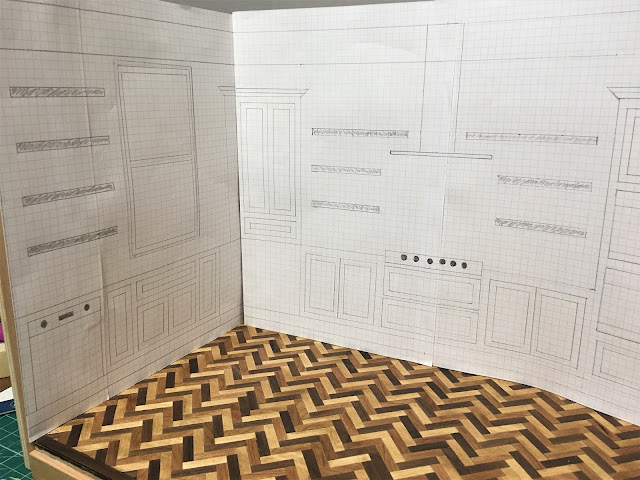 For the right side of the kitchen, I don't have a full wall to work with due to the area required for accessing the double ovens. Here, I decided to incorporate a wet bar, leaving space between the ovens and the wet bar for essential apron storage. Tasha loves aprons, and I am prone to finding really cute ones to give her as random "thinking of you" gifts. It would be fun to try and replicate some of them in the build. The wet bar was one of the elements that I really wanted to get Tasha's input on. So until we could collaborate, I created a generic template. 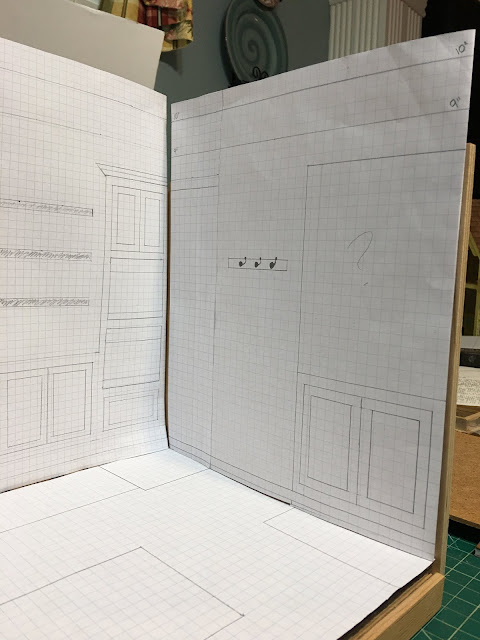 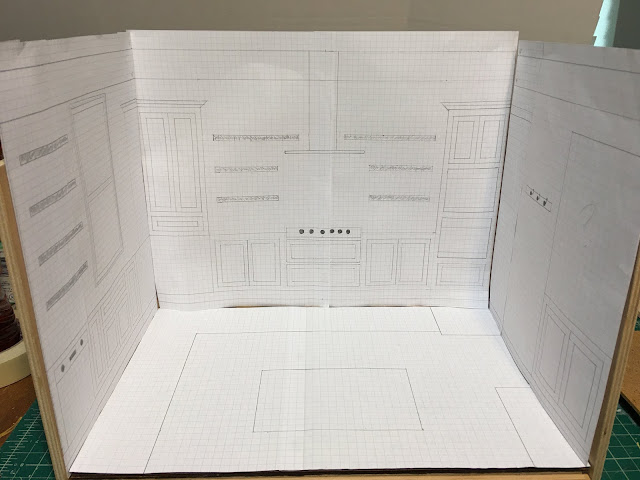 You'll also notice that I made a graph paper template of the floor. That way, I could really see how much floor space there would be with 2" deep counters. Is there space for an island? Yes, but the space actually left for bar stools is questionable. If the countertop overhangs enough, maybe there's room for two. The space between the counters and the island is the 1/12th conversion of the 1:1 standard space of 42". In one inch scale, that is 3.583 or approx. 3-19/32". Seems like a lot until you actually look at it. Often, you are able to shave a little off the 1:1 standard in your 1/12th conversion and it will still look reasonable. We'll see in the end if there are stools or no stools, but this is another confirmation for me that I should always take the time to make the graph paper drawings. It saves a lot of disappointment and frustration later on.

Since it was Russ' birthday last weekend, and because Tasha and her fiancé Brent have had Covid (and therefore antibodies), we felt safe about having a masked and distant gathering here with them. I was able to confer with Tasha about the wet bar, and with her input, came up with a combination of these two in the design for the last wall: 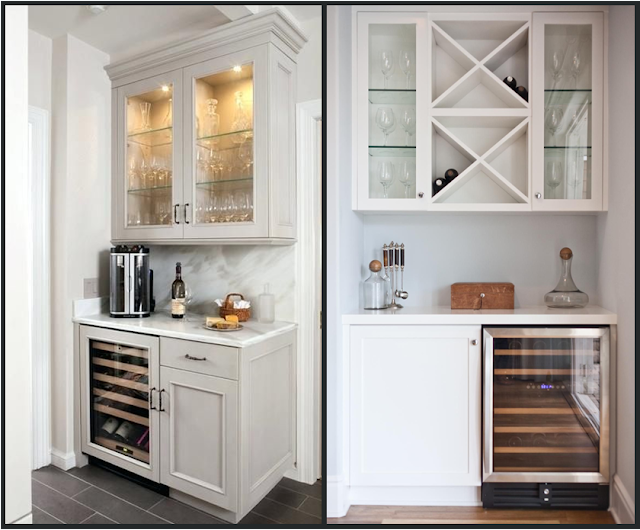 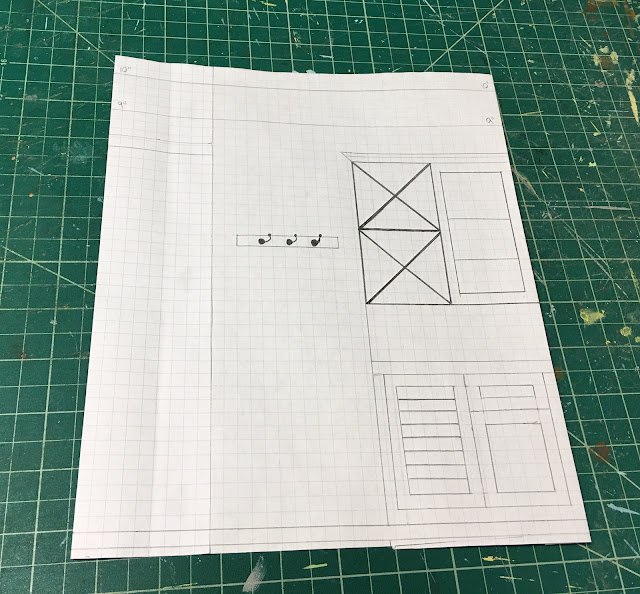 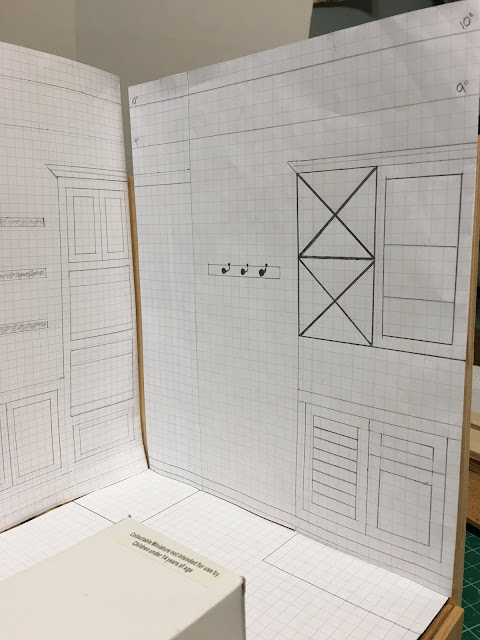 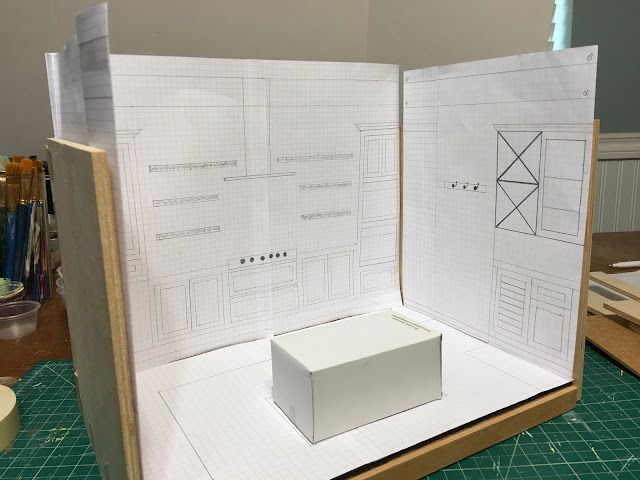 Now that the basic layout has been settled, I can turn my attention to the structural tasks. The walls in this kit are only 8-3/8" tall (not including the gabled walls). That will never do! A good, modern kitchen must have a minimum of 9 foot ceilings in real life. You can see in my drawings that I made lines at 9" and 10" on the graph paper to determine how tall I'd like the walls to be. 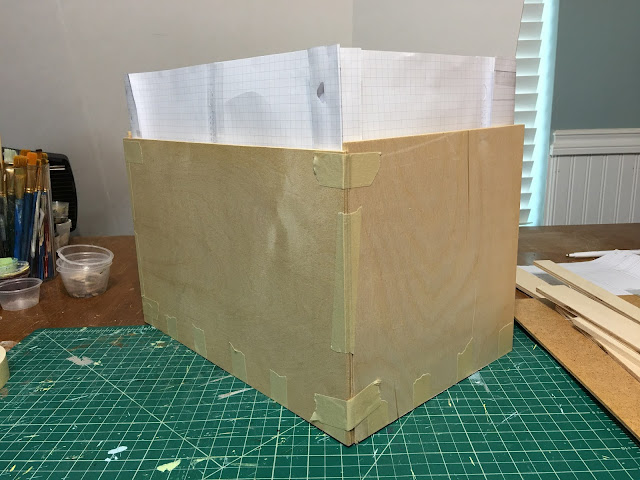 I added 1-1/2" strips of plywood to the tops of the walls to bring them up to 9-11/16" high. That should help to make the space feel more grand, and clear the way for open trusses in the gabled ceiling. She was very excited about that idea! Now I hope I can pull it off! 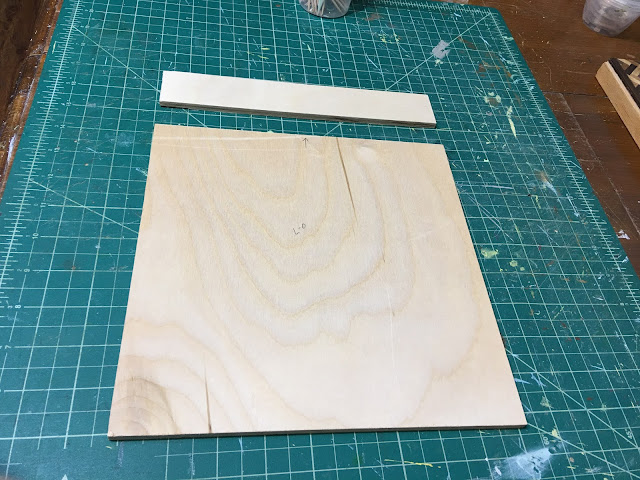 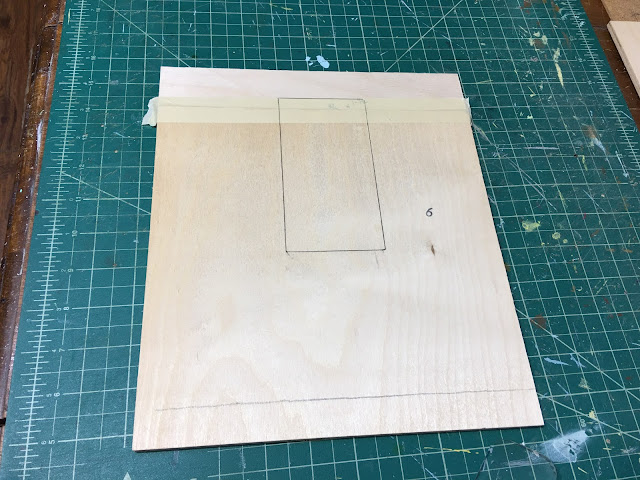 You probably noticed that the herringbone floor has been finished, too. Well, almost. When I consulted with Tasha, she was in agreement with me that the kitchen might feel more modern if there were less contrast between all three wood species. That can likely be achieved with a darker stain. I'm going to try the dark walnut that I used on the front edge strip and see how it goes.

In my next post, I'll share all the info about the floor, including resources for the material, and how I got 'er done. Hopefully, I'll have the sink window and skylight holes cut, and the hinge installed on gable roof. Sawdust... Here I come! 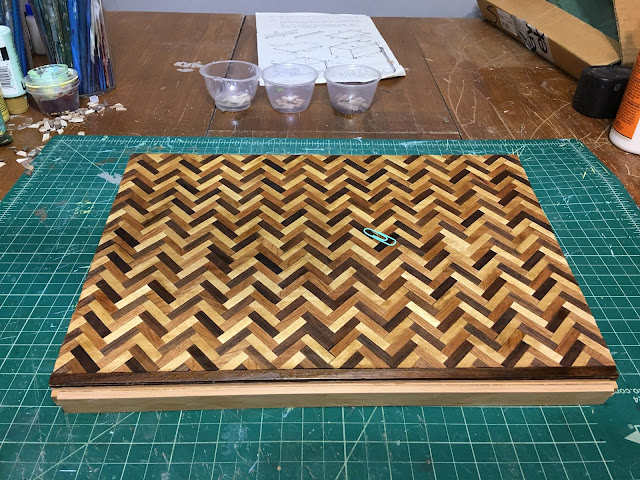 Have a great week my friends! Hope it includes something creative!