Last week, I left you with a sneak peek of the tiled kitchen floor that I was working on for the Willowcrest. I was laying it on a floor template made out of kraft board. I believe I even called it dessert? Well... Let's just say it didn't turn out so sweet...

I did follow all the way through with it, but I debated with myself about starting over many times. You know how part of you just wants to be finished with something, so you tell yourself it's good enough? Yet, there's this other (nagging) part of you that will never be satisfied because you know you could have done better? That's my struggle. I know I will end up redoing it, I'm just waiting for the four year old inside me to quit throwing a fit about it. And, I'm waiting for my wood supply to arrive.

What's wrong with it, you ask? Well... If it's not already glaring at you, I will give you the long answer. Are you ready for a story?

All the trouble started when I tried to set my mini table saw on fire... 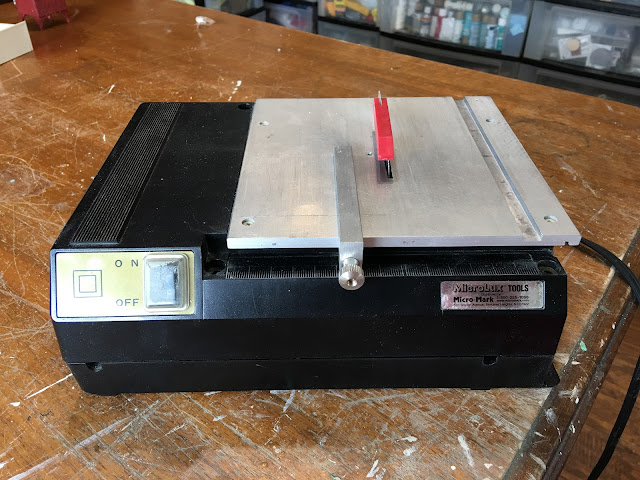 You see, the blade was wearing out while I was cutting the plywood for the new kitchen bay extension. I did not have another 80 tooth blade on hand (yet another long story. They are $29.99 and only available at MicroMark. Add their minimum shipping of $9.99, tax, and now you have a $45 blade. I only order them when I have enough in my cart to justify the shipping charges).

All I had on hand was the 100 tooth blade for very fine cuts. That does not work well with 1/8" plywood. So, having only eleven inches left to cut through, I just kept using the dull blade. When a blade gets dull, it gets hot by being overworked as it tries to cut through the material.

See the compartment in the above photo? Do you see the bottom of the saw blade? A lot of the sawdust goes in that compartment, sharing space with the blade. A hot blade + sawdust = fire. Well, it could catch fire. For me, luckily, it was only smoke. There were no actual flames, thank my angels! But there could have been. Fortunately, I finished the cut for the bay walls before combustion occurred! Lucky, lucky, lucky!

I cleaned the compartment and changed the blade to the 100 tooth. That would have cut like butter through basswood, but I was out of the wood I needed. The next best material I had on hand to use for the tiles was illustration art board.

To avoid making all those cuts by hand (which I know I am not precise at), I thought I'd use the saw with the rip guide set to 3/4". I could rip 3/4" strips, then cut the strips into 3/4" individual tiles. Sounds reasonable, right?  Unfortunately, the blade did not seem to work well with that material at all. The cuts weren't clean, the blade (which has always had a little too much side movement, causing tolerance issues) wanted to bind (scary when your fingers are that close), and it shot paper particle cannon balls in my face! Ever had a spitball facial? It's like sandblasting your face. I don't recommend it! 😣

But, like the plywood with the dull blade, I carried on. The results were tiles that were not always square. I think, out of pure stubbornness, I laid them anyway. This, of course, lead to part of my dissatisfaction with the floor. It left gaps, but I kept telling myself that you'd hardly notice when I got the wax applied. 🙄

As if that wasn't bad enough, the orientation I set for the diagonal tiles was just wrong. Instead of squaring the room and starting the diagonal in the center, I drew a line from one corner to the next and then followed it. Because of this error in my method, all of my edges end with unequal tiles - a really sloppy looking job. I also came up with a better idea of how to do the borders, after I'd already gotten a lot of the red border finished. But did I ever halt at any of these warning signs? No. When I mess something up, I really do a good job at it! So, the floor is awful and I am dangerous with tools.

This concludes our tale of How To Really Screw Up A Tile Floor And Live To Regret It. The moral of the story is: Listen to that little voice telling you to stop. It might save you time, material, frustration and embarrassment. It might even stop you setting yourself on fire. 😒

Meanwhile, while I was letting the four year old throw her fit in the background, I had gotten started on the kitchen's "tin" ceiling with much more satisfying results. I made the design up in Design Space and let the Maker do my cutting for me. 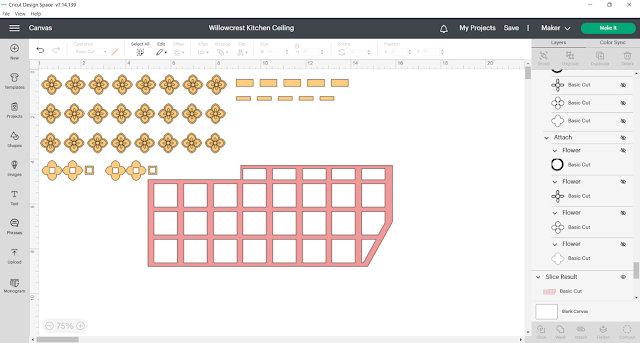 The grid that creates the recess was cut in illustration art boards (perfectly), and the four layer flower pattern for the recesses was cut from kraft board. I should have let the Maker cut my floor tiles for me! 🤪

It was a pleasant surprise when the graph paper pattern I made for the kitchen floor worked perfectly as the pattern for the ceiling. The grid fits in the center of the pattern, which is cut from more kraft board, and the space around it will be filled with trims. 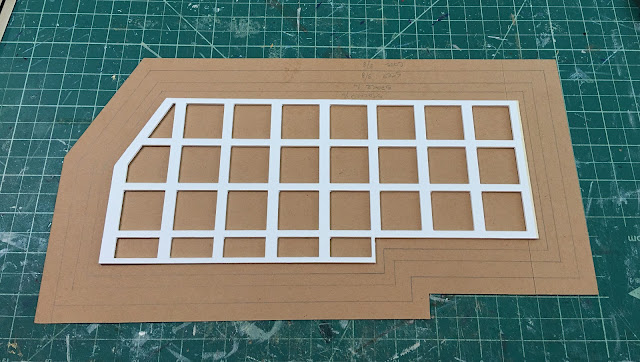 Here, I have filled in most of the squares with the layered kraft board flowers. I am getting the angles I need to cut using my angle finder. My geometry teacher must be up in heaven somewhere screaming "I told you you'd need to know how to use a protractor!". If she'd only told me it would come in handy for dollhouses, I'd have probably taken her more seriously! Luckily, if you were daydreaming during geometry class like I was and need a refresher, we now have YouTube! 😁 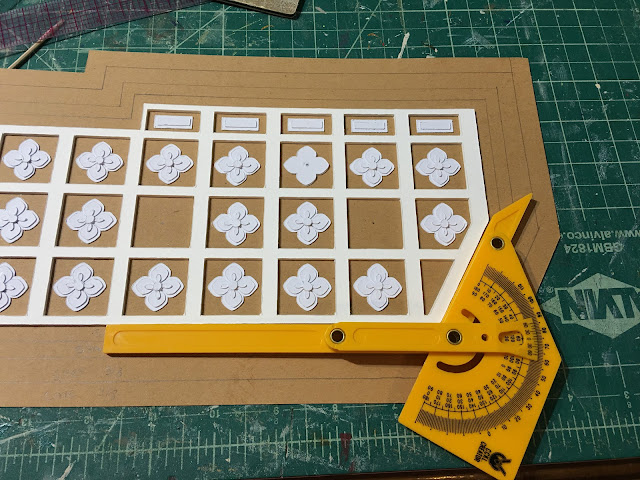 The photo below is the ceiling with the center grid completed. The three squares with only two layers of the large flower shape are where pendant lights will hang. The two squares with the square holes in the centers are where recessed lights will go. I have added cove molding around the edges, a stepped molding against that, then stacked a plain layer and chair rail molding around the grid. My angle measuring and cutting was not precise, so I have been aided by wood glue caulking to help conceal any gaps. I added the half pearls to the intersections to add another layer of detail. 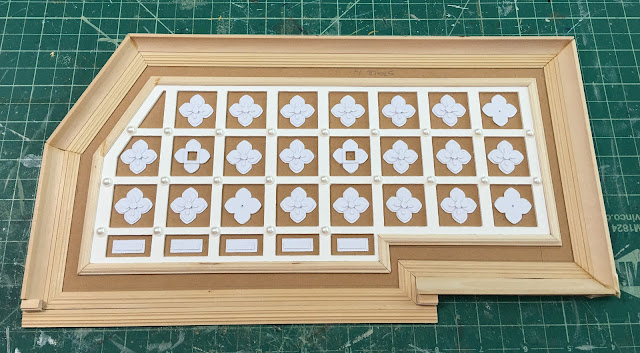 It seemed like in a house that is at lest 60 years old, the original tin ceiling would have probably been painted over a few times, so, I decided to paint it in the trim color I'm using in the rest of the house. It looks so nice with a couple coats of paint, and it turned out even better than I had envisioned! It makes me feel a little bit better about screwing up the floor. 😊 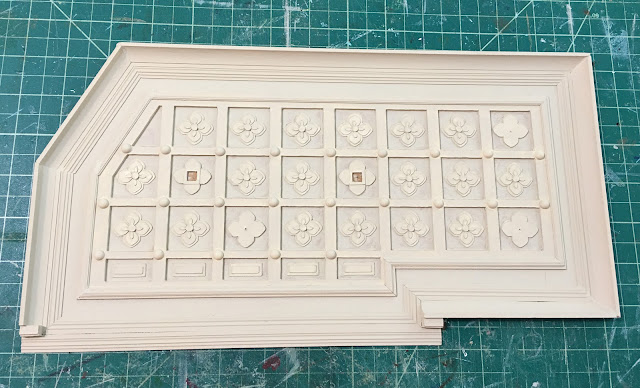 And here is the test fit in the kitchen. I just love it! I can't wait to see it with all the other kitchen pieces! 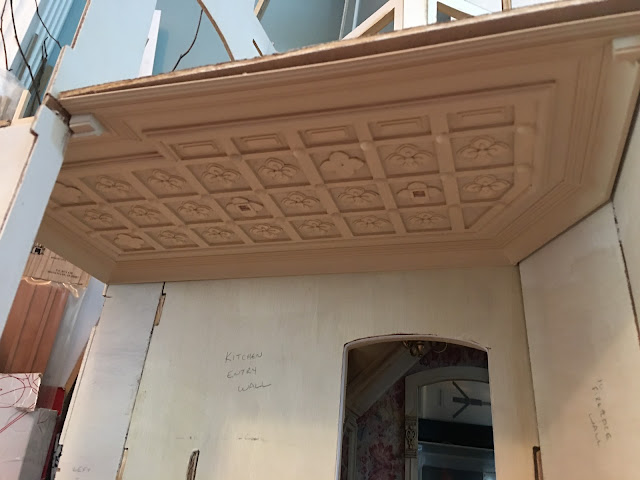 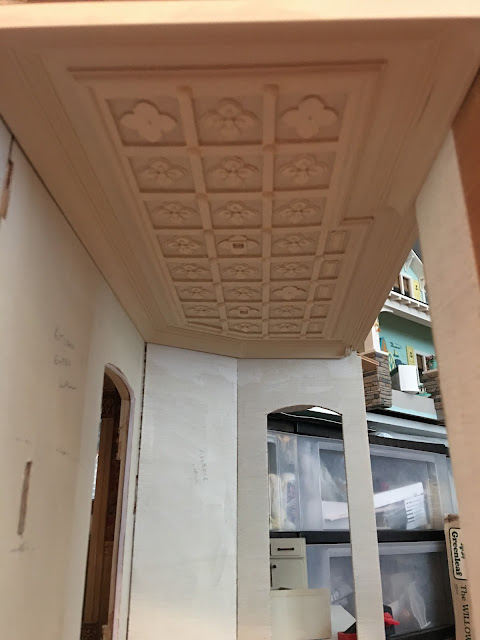 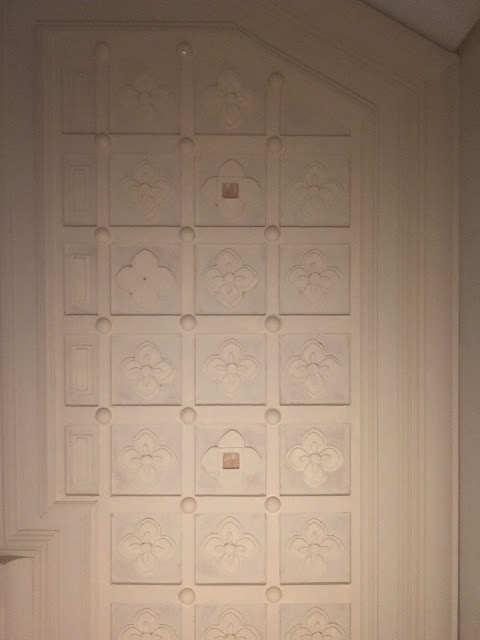 A happy ending for the ceiling!
There is a bit of an epilogue to the saw story...
When I told Russ what I had almost done to my mini table saw, I thought I was going to be in big trouble! Instead, he bought me a better and way more capable saw. And, he told me to order the wood supplies that I needed and to get extra blades, too. He's quite a wonderful partner to go through life with! 💗
Once I get it all set up and practice a bit, I'll give the four year old a popsicle. Then we'll try again with the tile floor. Maybe this time, we'll love it as much as we do the ceiling! 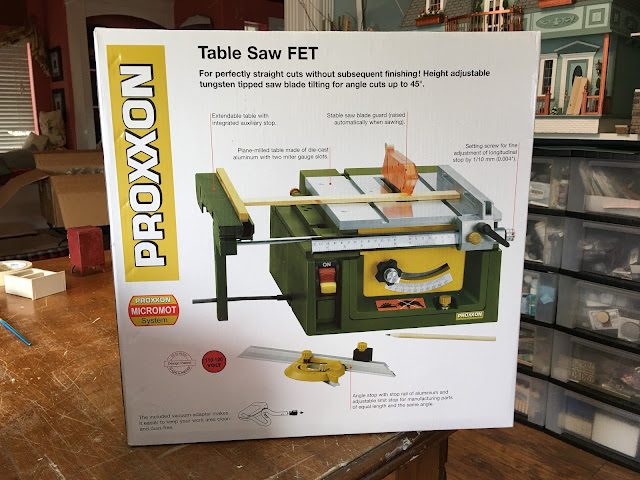 Just like in real life, with minis, sometimes you win some, sometimes you lose some, but you always try again. Keep trying until you love it, my friends!
Hopefully, back next week with a flooring success story, or at least some kind of progress!
xo xo,
Jodi