I bet most of you are aware that HBS/miniatures.com recently re-released a couple popular past Creatin' Contest kits. For those that did not know, there was a vote held on Facebook between four favorites. The top winners were Lisa's Country Cottage from the 17th and MiniTown Loft from the 19th annual Creatin' Contests. 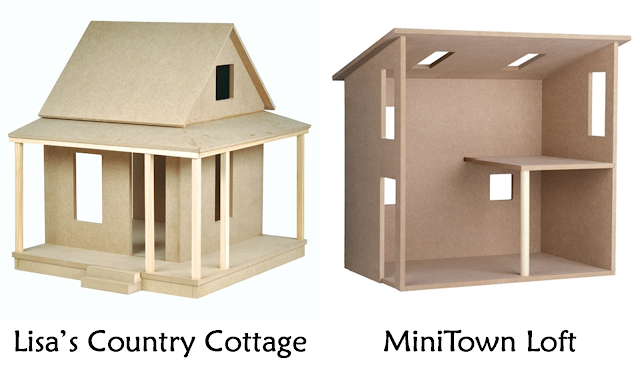 For Christmas 2013 (the year after the contest), I made the Lisa's kit into a fishing cabin and working lamp for my dad. I had so much fun, but it was early on in my foray back into miniatures. The scope of my idea and the finishes were pretty elementary. I wanted another chance at this kit and have coveted it ever since. Once in a while you'd see a kit come up on eBay, but for a lot more than I was willing to pay. Apparently, other people really wanted another chance, too! Seeing that they were available again, and at a great price, was like a dream come true!

The style of the kit by itself is completely adorable, but the innovative improvements that some of the contestants made have become my favorites. I wanted to incorporate many of those features into my cottages and see where the design lead me. You can see all of the entries and more photos from the incredibly creative contestants here. Below are just some of my favorite features. 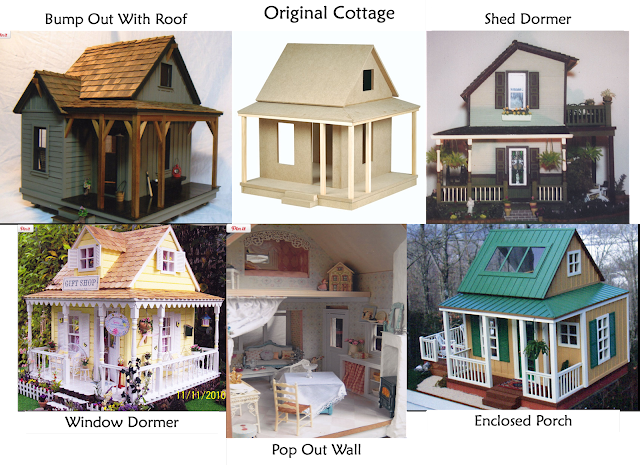 Wait! Did she say Cottages?!? You caught me! I did use the plural and on purpose! You see, I've had a project idea niggling at me since the Covid lockdown started, and this kit is perfect for both structures. I was going to make them from scratch out of foam core, but the Lisa's kits will be so much more sturdy while still providing a small-ish footprint. More on the concept later, but for this post, we'll just talk about the structural changes and additions.
I got the kit pieces taped together, then made cardboard walls/roofs to help mock up the additions. So far, I liked where it was heading... 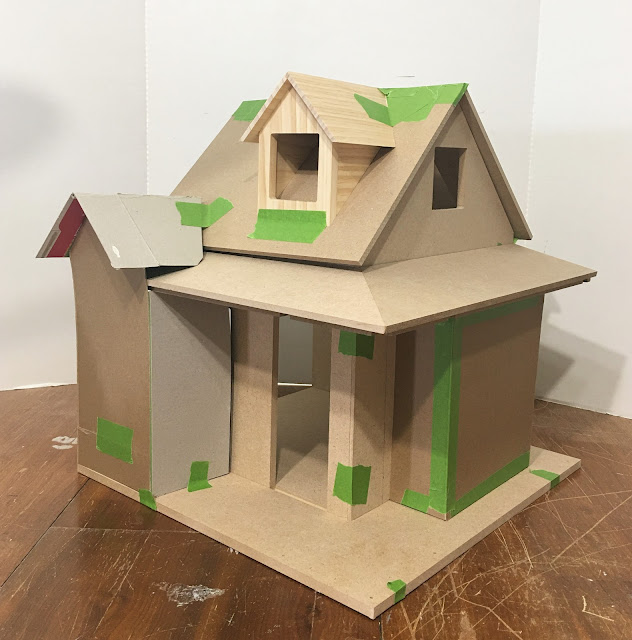 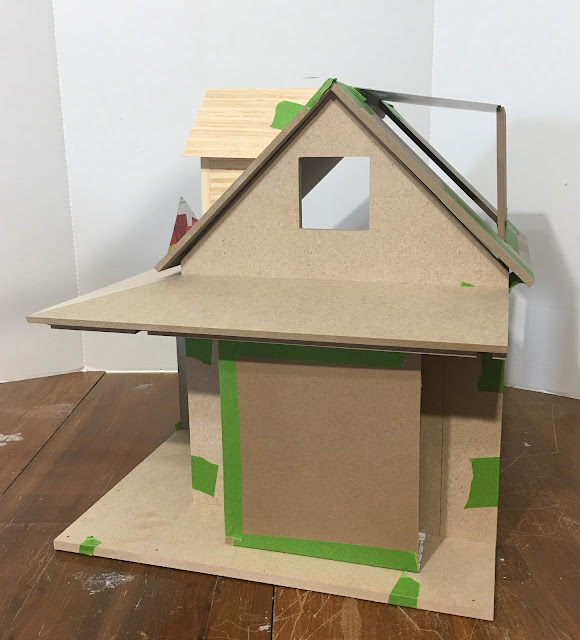 I consulted with my on site contractor (wonderful hubby Russ) to check my ideas for soundness, and because I would need his help and big boy tools to cut new dados in the 3/8" MDF walls. This was necessary because I wanted to reduce the amount of ceiling height on the first floor in order to increase the head room in the attic space. By lowering the second floor (by cutting lower dados into the side walls), the attic now has a knee wall which will great for furniture. The first floor ceiling height is now 7-1/2" and the attic is 8" to the peak. This is perfect because the tallest inhabitant will be 5". 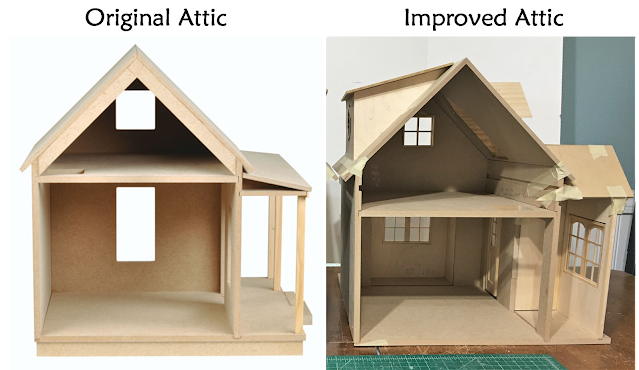 I wanted to make the second cottage a mirror image of the first. This meant creating an additional dado in the floor piece to accommodate the change in wall positions. An easy job for Russ with his big boy table saw. While it seemed as if me and my petite table saw and jigsaw took forever to cut my new walls from 1/4" plywood and the 3/8" MDF, Russ' saw was like cutting butter for him. Luckily, he was happy to help me. I did my best to woo him into being partners in the whole project, but he's just not that into minis and could not be persuaded. :O(
It took a couple days to get the cottages roughly constructed, but it was a lot of fun to see their new characters beginning to develop. You never really know at this stage if your idea is going to be a good one. You just have to follow the lead and hope for the best.

I dug through my window and door drawer and came up with the windows and doors from the 23rd Creatin' Contest kit. I didn't use them in the contest build because my Three Little Pigs theme had a Fairy-tale Tudor vibe. But they are really cute with the arch and mullions, and I had enough of them for the lower windows on both cottages. I was able to cut down the double door frame to make a single door for one of the cottages. 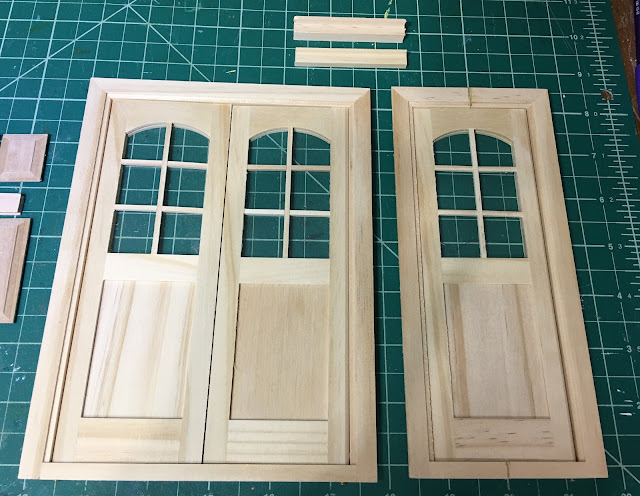 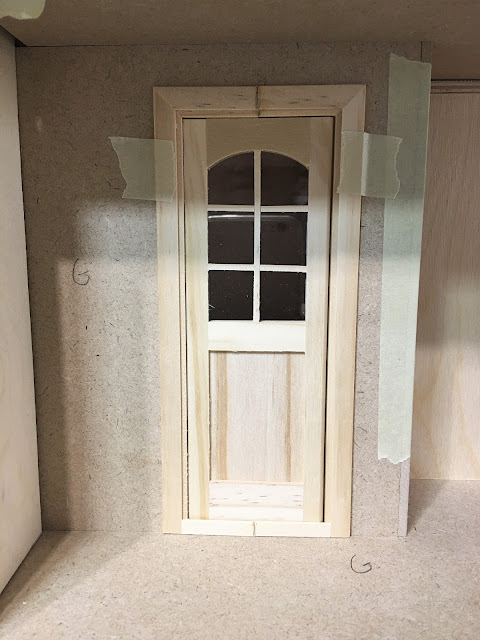 For the second cottage, I could have made another single door but I wanted it to have it's own character. I had a cheap $3 door from China that, with just a little remodeling, made a nice dutch door. First, I removed the door from the frame. Then I cut the door's bottom two panels off, leaving half of the upper frame piece. Next, I removed the metal door pins and heated it in the microwave until the glue softened enough to pull the upper panels and frames apart. After removing the remaining glue residue and sanding, I cut a piece of 1/16" Lexan to make the window. I gave the door a couple light coats of paint so that I could assemble it and not worry about getting paint on the glass. I drilled holes for an additional door pin where the two doors will meet and swing separately. I glued the upper frame pieces together with the Lexan inserted. I had to drill new pin holes in the frame because my door needed to swing the other direction. Thankfully, all the steps went smoothly and the new Dutch door will work well. 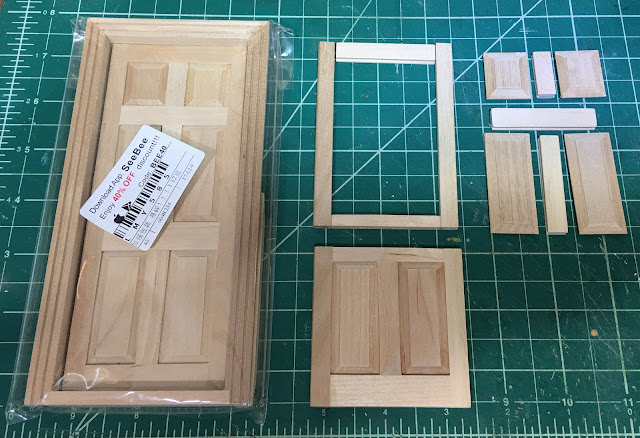 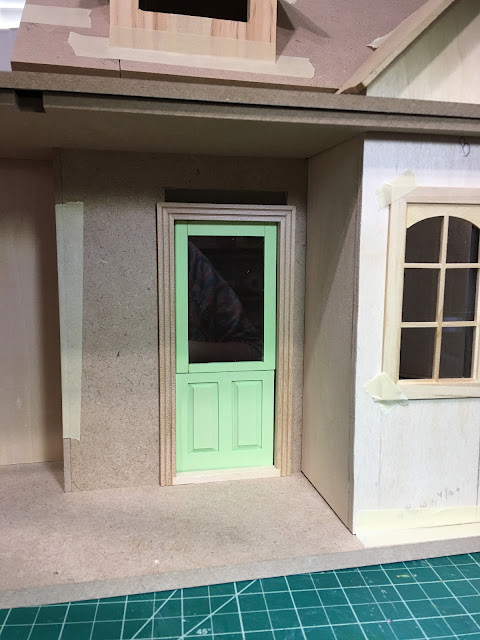 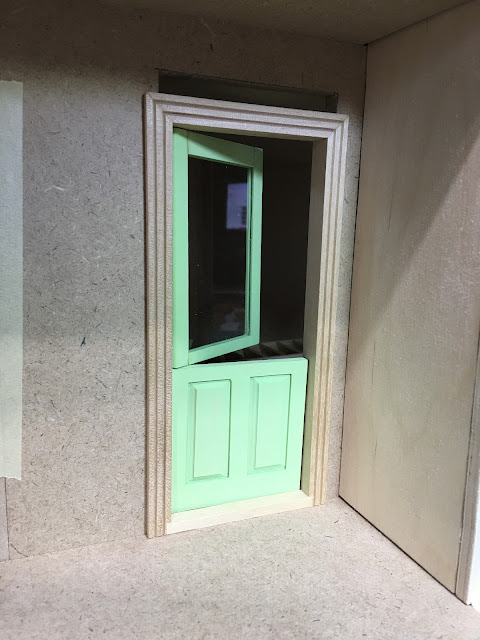 Here are some more photos of the expanded interior. While it's still a pretty compact cottage, the usable space has been improved considerably, and the character of the new facade gives ample opportunity for cuteness overload! I hope I can make the most of it! The old dado tracks will be filled in with 1/8" x 3/8" basswood strip. 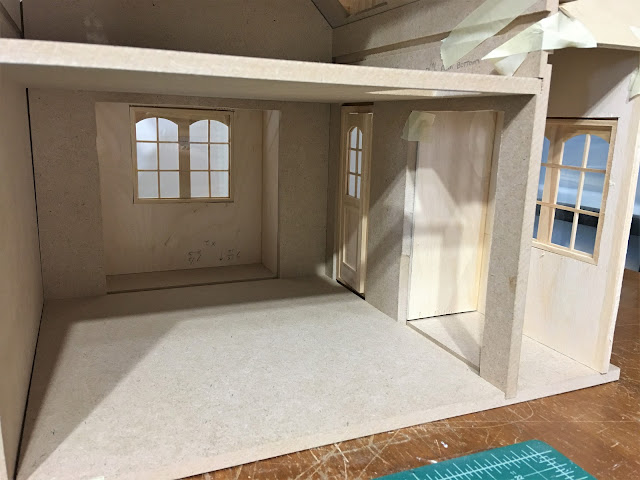 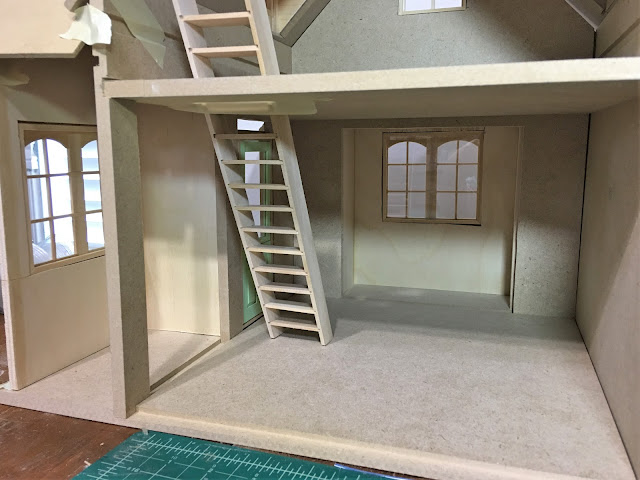 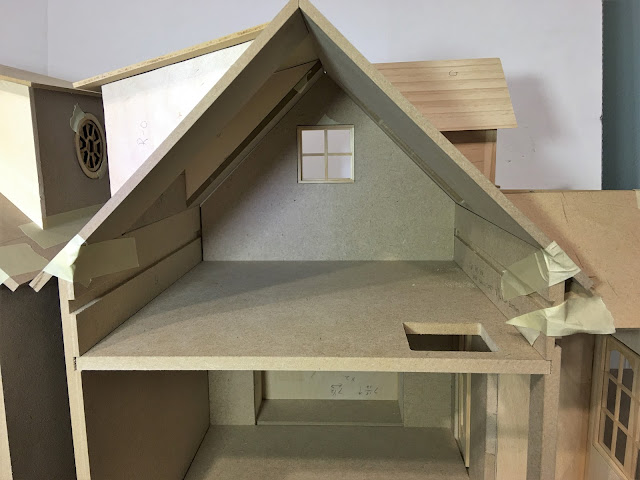 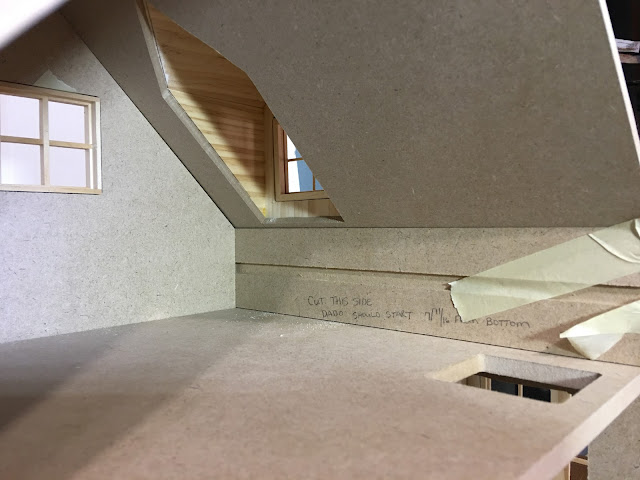 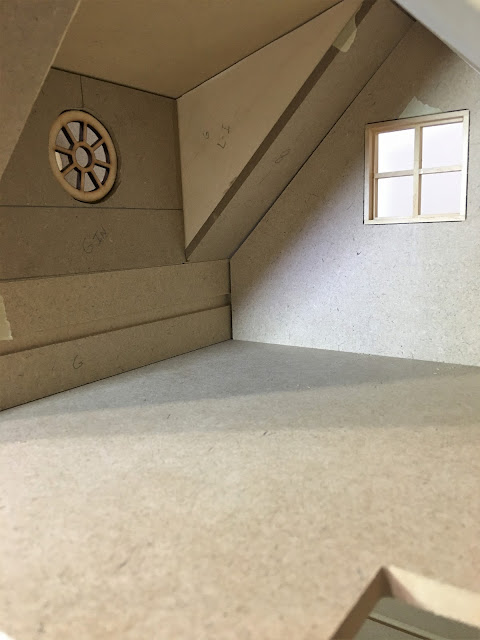 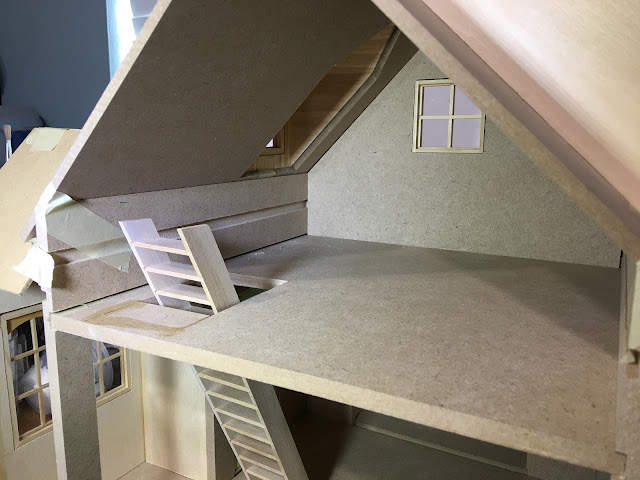 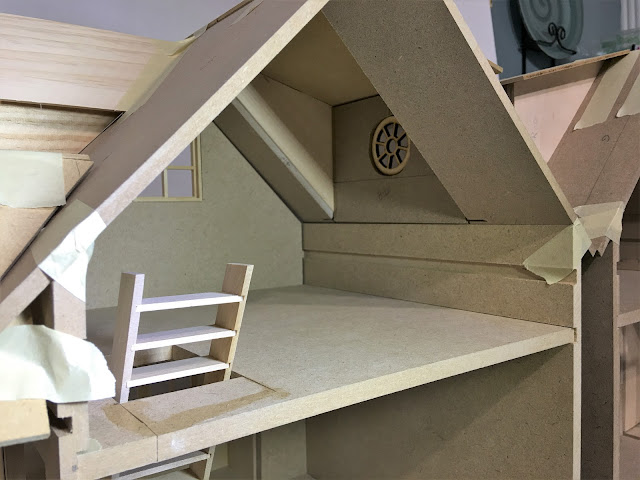 Another project?!? I know, I know! I still have the bakery in progress and the poor old, nearly finished Storybook Cottage. I imagine I'll be bouncing around between all of these as the inspiration hits me, but only after I finish dad's Father's Day gift.  It seems strangely meant to be that I am working on new Lisa's Country Cottage kits as I am making new things to put into dad's old cottage after all these years. But if these last few months have taught us anything, it's that we must make the most of each day. You never know what tomorrow will bring.
Stay safe and make all your dreams happen, my friends!
xo xo,
Jodi
Posted by Jodi Hippler at 8:52 PM