When last we spoke, dear friends, I was struggling to reach the next point with the Storybook Cottage. Spray painting furniture is out for a while - we've experienced  Snowmageddon here over the last couple weeks! Literally - that's what the news called it! Too cold to do a good job spray painting, I could have started on pillows, cushions and bedding, but sewing makes me really nervous! Until I find my bravery elixir, that's out for a little while too. The truth is, I am just kind of board with shabby at the moment. 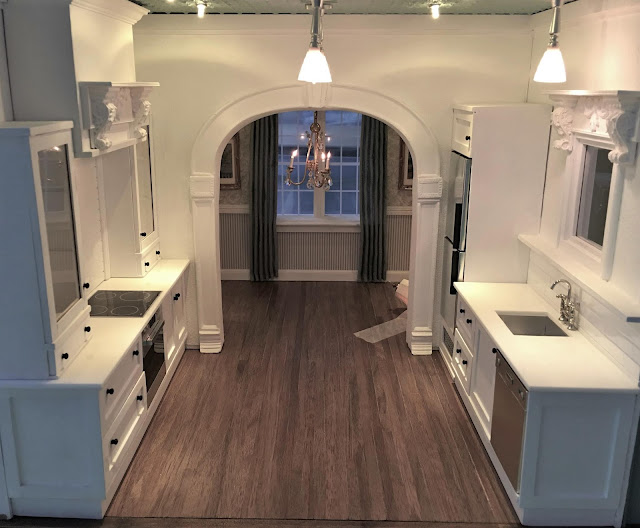 I began to look around at the graveyard of unfinished projects on the shelves in my work room and think about why I stalled on them. I considered the kits I have and thought it may be fun to start on a new project. I quickly realized that was a bad idea! The guilt of having started yet another project (while so many are still waiting in varying degrees of completion for their turn to become all they can be) would crush me! I finally decided to drag out the card table again, bring down the New Orleans, and pick up where I left off - the kitchen. But there were a lot of issues to figure out. You see...


Back in the summer of 2016 I used a 40% off plus free shipping coupon from Hobby Lobby to buy a Beachside Bungalow kit. It was a total impulse buy because it was so inexpensive. I liked the old LA bungalow look of the house, though it seemed small and hard to lay out a proper function. I began to make plans for a remodel and started collecting seaside and beach-y things for it. I also worked with Elizabeth from Elf Miniatures to design a really neat and contemporary kitchen. Then, like my usual M.O., it got put in the queue of projects and moved further down the list as I became excited about other things. I know! I am rotten!


But, could that kitchen, with a little adjustment, work for the New Orleans? I'd have to do a little bashing to make them fit, but I do enjoy kits and bashing. Not only would it assuage my guilt, I love the New Orleans and felt excited at the thought of working on it again! So that is what I did...

The Elf kitchen cabinet kits as intended for the BB had a wall of cabinets and an island with the sink. The New Orleans kitchen is laid out galley style, and after assembling the kits, I realized the room was just an eighth of an inch too short to fit each cabinet run. So the first puzzle to solve - how to lengthen the floor. Also, The original plan had a double door fridge/freezer built into a cabinet. The NO kitchen would need a smaller fridge and enclosure. Luckily, I had a small kit in my stash and could make an enclosure. 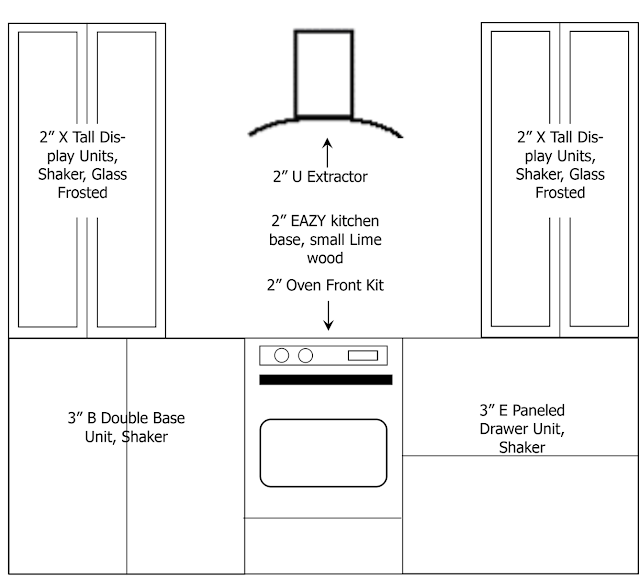 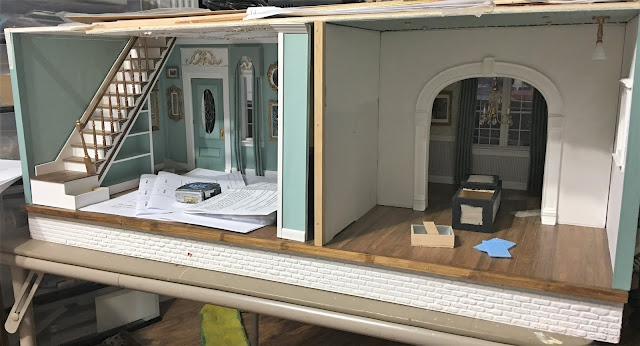 Once the length and layout were worked out I could paint the cabinets. The kitchen plan was always going to be white on white with blue and white decor. The handles that came with the kits, "D" shaped stainless, seemed a little too modern for the traditional house, so I opted to go with simple wooden knobs painted black to help tie in the more contemporary appliances. 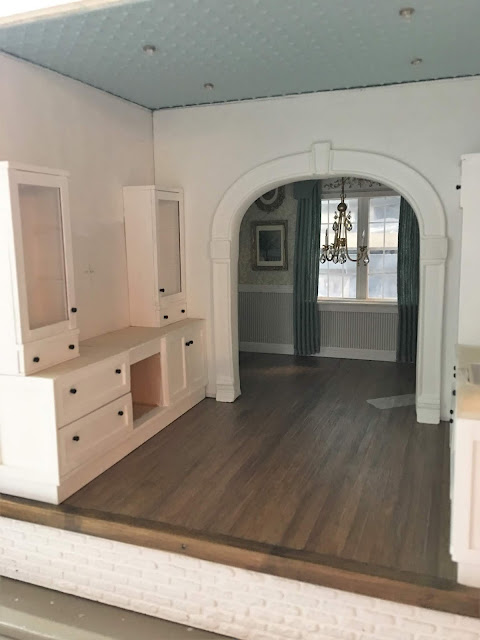 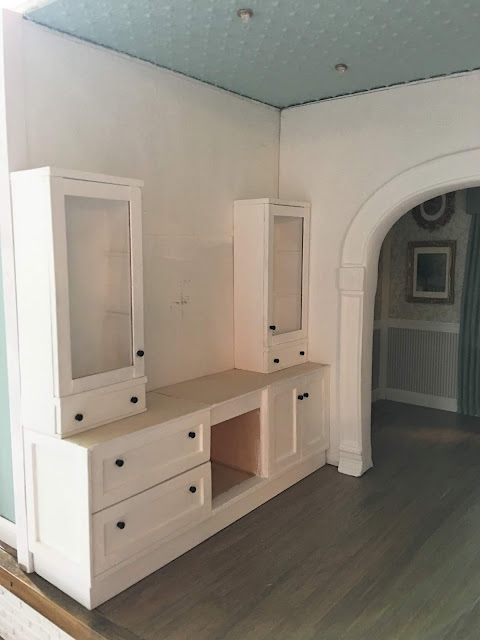 The fridge cabinet is right in front of the door molding, so I added a vent to the base so that the door would appear to clear the molding that may otherwise hinder it's operation (even thorough it is only a dummy fridge and won't really open anyway). The height matches the cabinets flanking the stove. It's a really neat feature in this kit that the ceilings are 10" high! 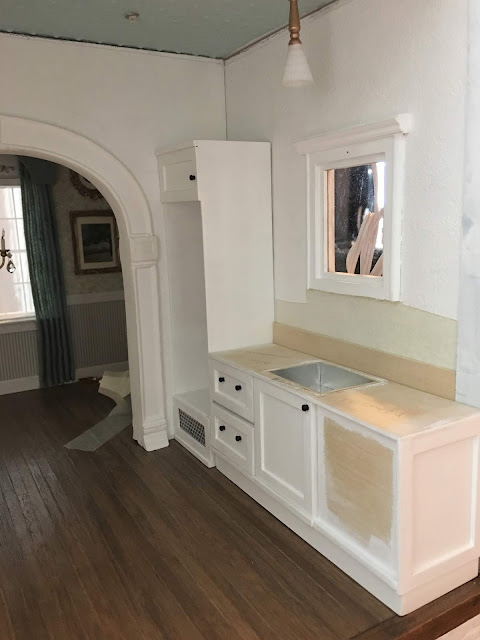 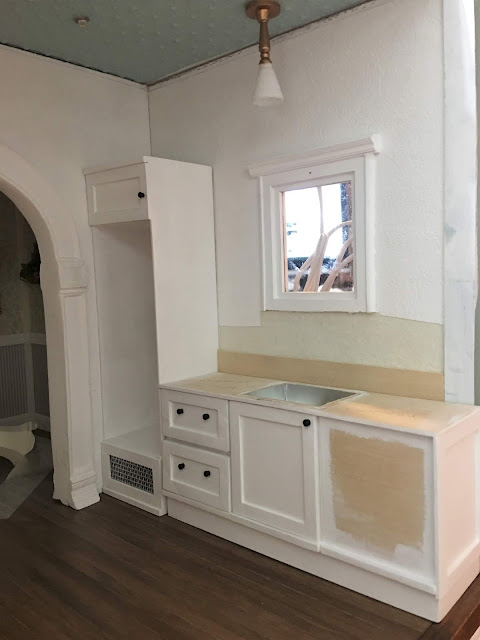 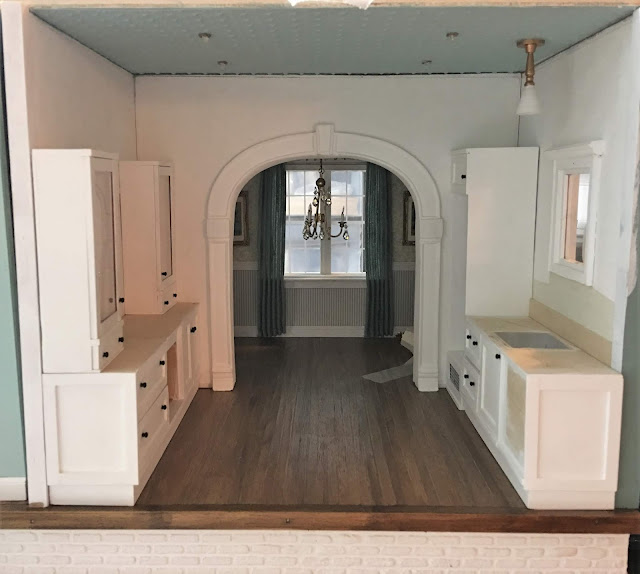 Whenever I set out to make up the appliance kits with aluminum, I get more nervous than I have cause to. They usually work out very well using E6000. The modern stove hood was the exception. The aluminum just didn't want to stick to the curved wood. I was just getting ready to sand the aluminum with steel wool and clean it with alcohol for another try when I realized: It wasn't supposed to work. The hood is just too modern and wrong for this kitchen. So, I set out to make one with a more traditional style.


Little side note here - when I was trying to figure out what to use to make the vents for both the fridge and the stove hood, I asked Russ for a piece of drywall patch tape. It's on a roll like tape, has a square mesh pattern, is yellow and is good to keep in mind. However, Russ brought me in a piece of leftover screen from when we re-screened the sliding screen door. This is the type that they make for people with pets who like to claw at the screen door when you don't immediately heed their demand to be let in. It has a rubber type of coating that keeps it from shredding at the hands of paws with nails. It worked out very well on our sliding screen door and is perfect for mini vents! The aluminum paint marker worked great, too! 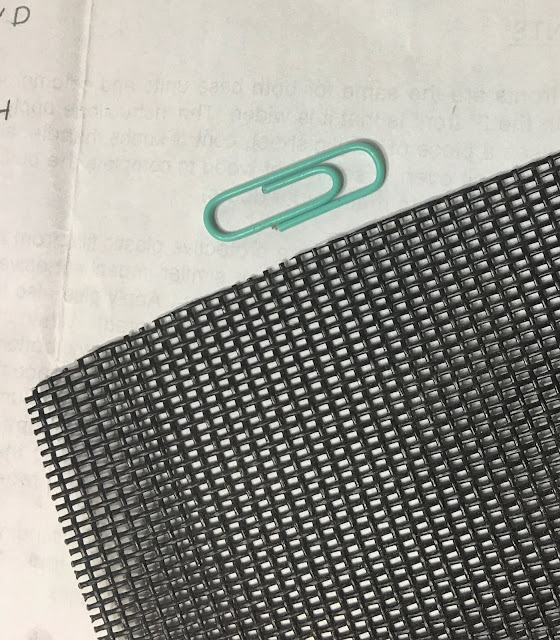 I was so hoping to be able to use the Unique Miniatures shelves I've been saving for the project, and the stove hood gave me a great place for one of them! I made up a basic top and bottomless box, added crown to the top, a light bulb inside and a frame with light lens and screens for the bottom. The light lens is a piece of plastic packaging painted with many layers of opaque Gallery Glass. 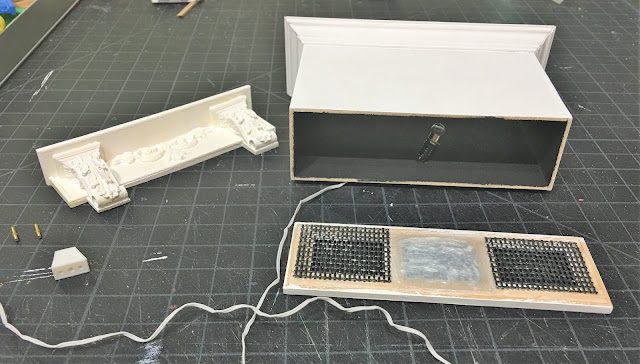 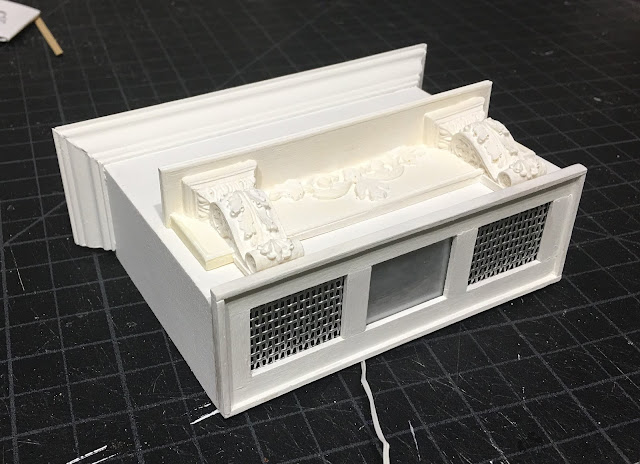 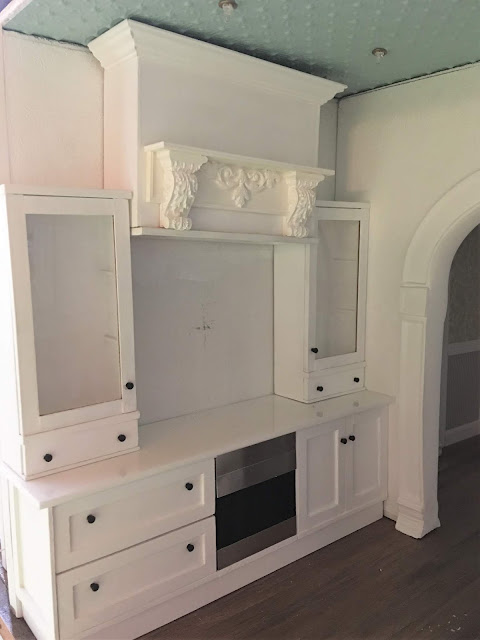 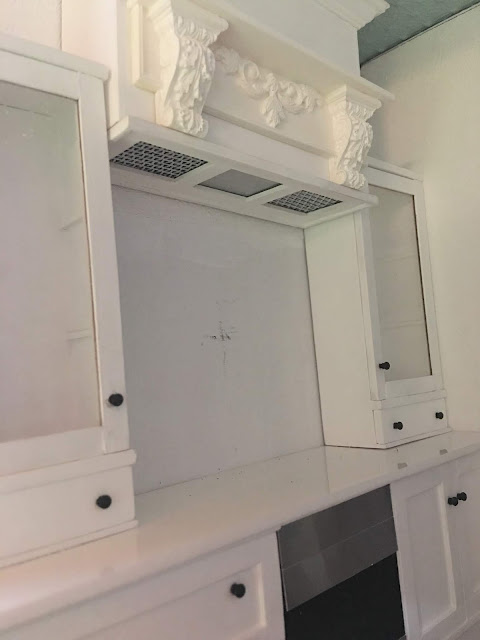 For the stove backsplash, I wanted to try out a new product that I bought on impulse a while back, too. It's a Wood Brick Sheet which has the brick pattern scribed into it and is very inexpensive. It is 9" x 5" x 1/8" thick and was also easy to cut using the mini table saw. I painted it with three coats of white chalk paint, sanding in between, trimmed it in wainscot molding, then sprayed it with Krylon Triple Thick Glaze to make it look like porcelain subway tile. Yeah! No egg carton bricks this time! 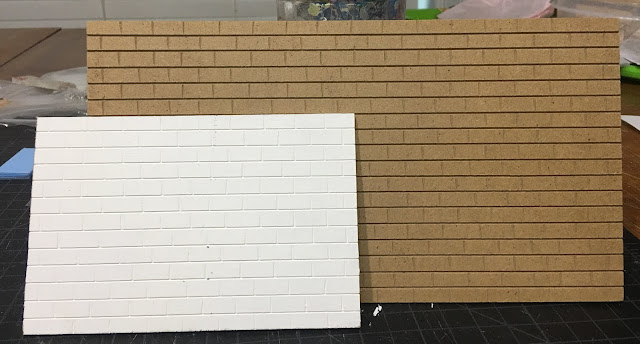 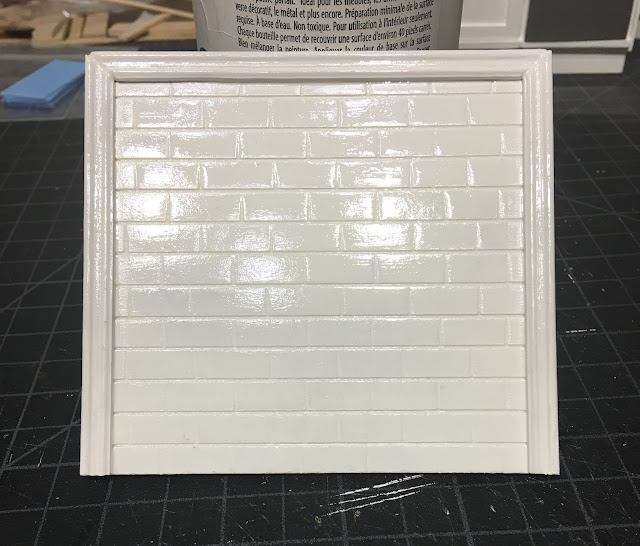 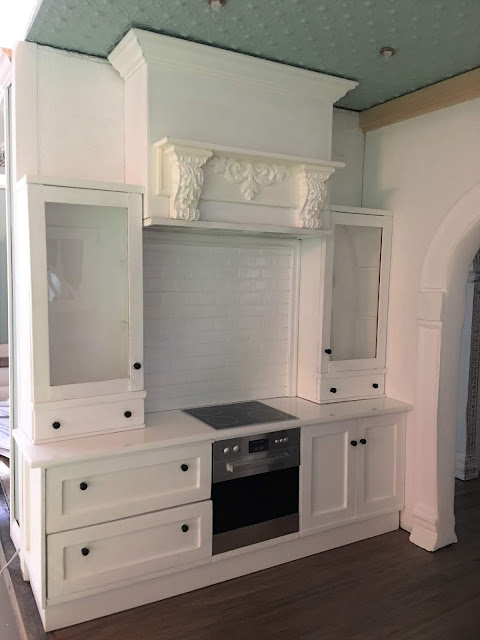 With the stove light on... Yikes! That screen shadow is disturbing! Had to make some light block panels and install them... 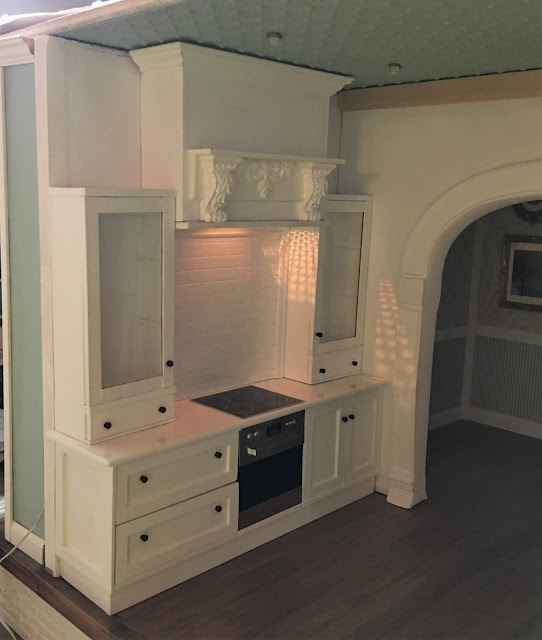 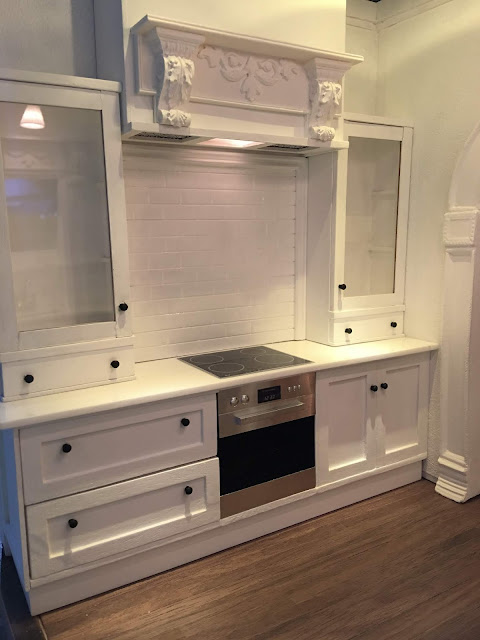 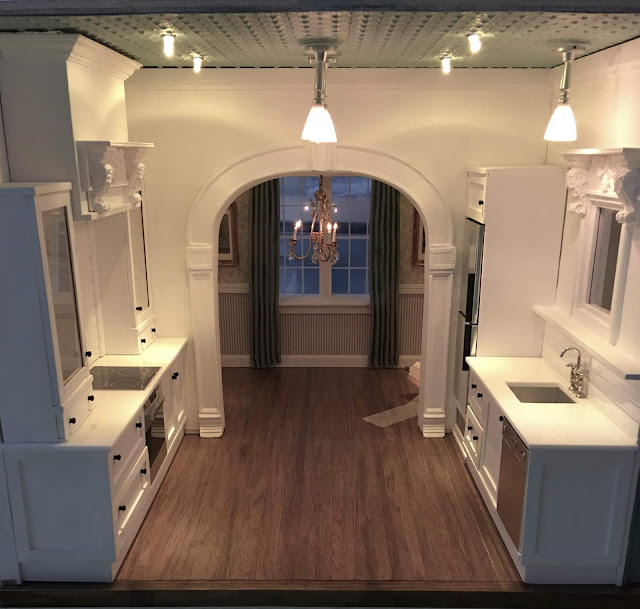 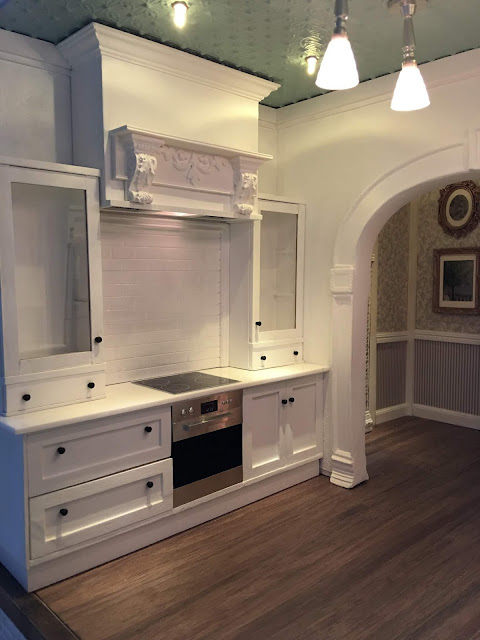 For the sink side of the kitchen, I had to cut the perspex countertop, originally the island dimensions, down to my counter width and length. Also an easy job with the table saw. I used the same tile backsplash, adding a shelf along the top, and was able to find a way to use the second Unique Miniatures shelf above the window by trimming up the window molding. 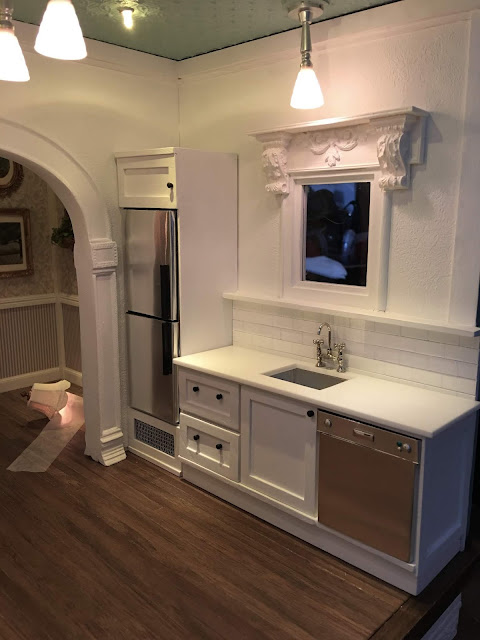 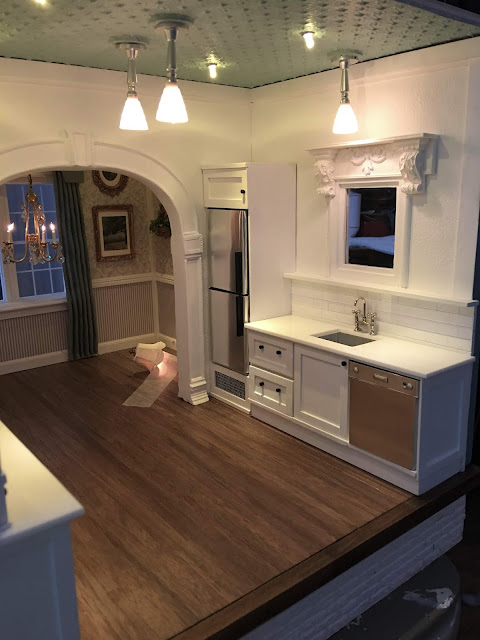 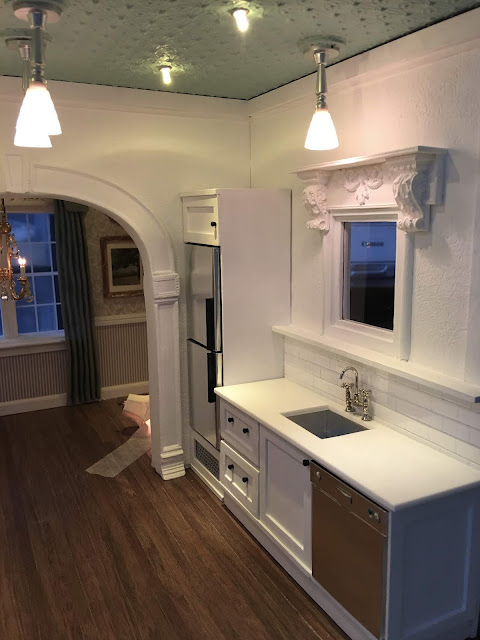 And some photos with the lights off. 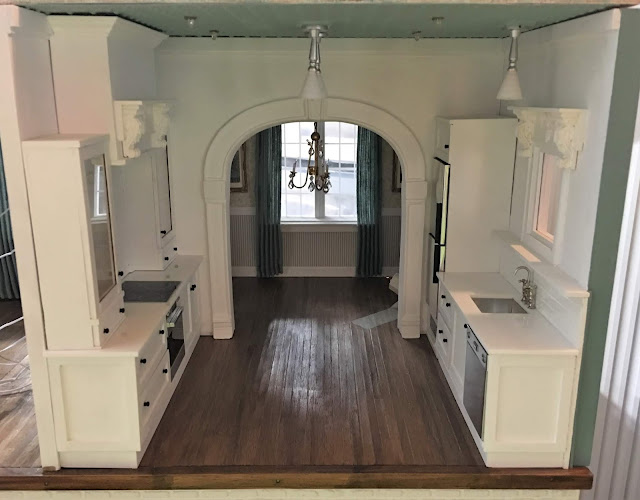 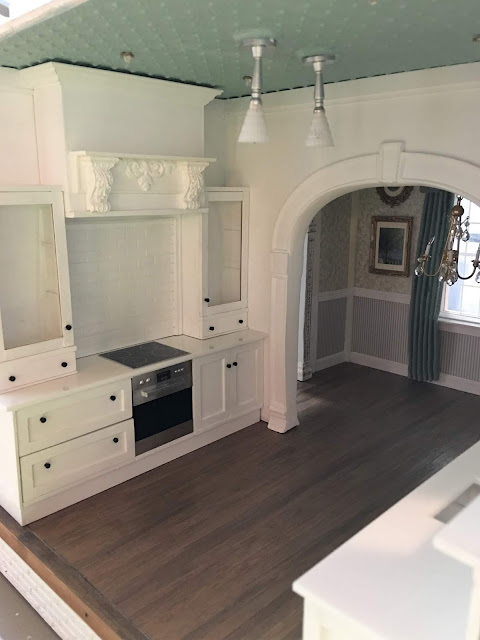 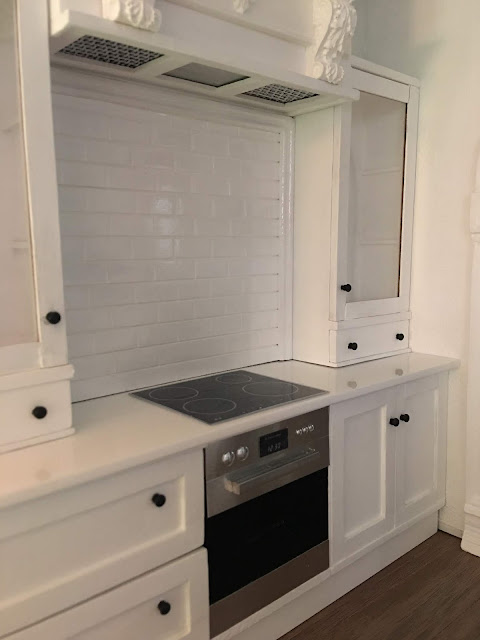 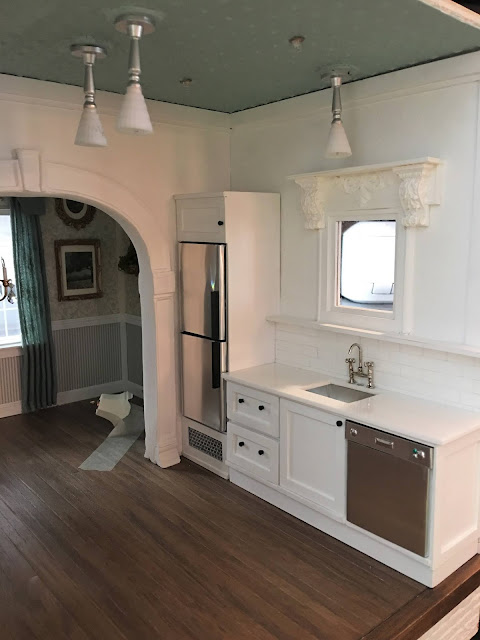 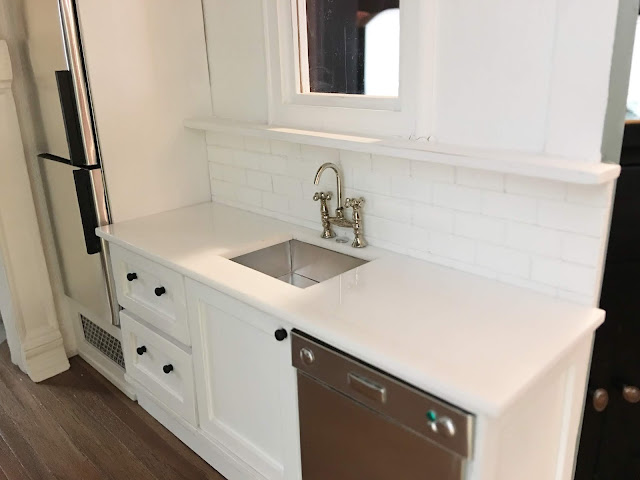 I really love the way the kitchen worked out, and I love knowing that in just over two years my confidence, tools and skills in minis have improved enough that what was intimidating and stopped me from continuing with this project was only a temporary setback. There are many more challenges ahead of me with the New Orleans, but I am happy to feel ready to tackle more of them!

In closing... As many of my regular readers know, one of the most precious aspects of the miniature hobby for me is how having a blog and other social media resources has allowed me to be involved in a tiny world full of incredibly kind, supportive and talented miniaturists. From newbies to artisans, those connections have helped me get through some of the toughest of times in my life. You are truly a blessing and lifeline to me. In light of that, I'd like to take a moment thank all of my new and old followers, and tell you just how much it means to me that you visit and share this joy with me! If you have a blog, please do leave a comment and let me know so that I can follow your work, add you to my blog roll, and hopefully, help others find you, too. You can never have too many friends or too many minis! :O)