The tardiness of this post is credited to the significant challenges I had in front of me this week. But, as you can see, they have met their match and Pound Cake's name is officially on the shop! 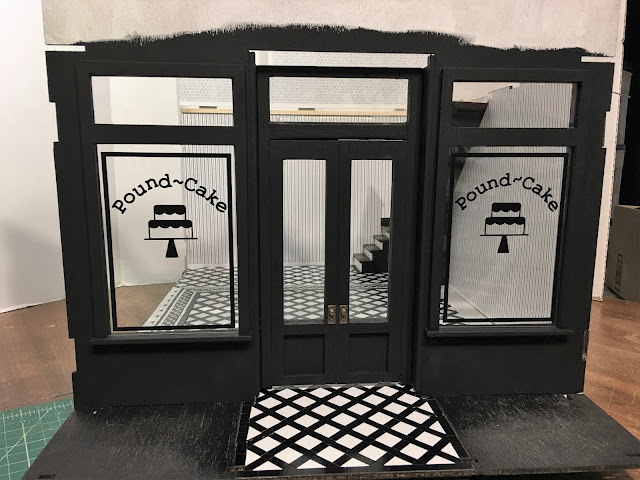 Getting the front wall installed on the Brimble's Merchantile kit became a little more complicated because of the fancy and much thicker coffered ceiling. I had to notch the side frames for the front door and dry fit them with the ceiling in place. Then, I could dry fit the door and window frames and begin the long process of installing them. This wall has to be completed before the ceiling can be glued in. 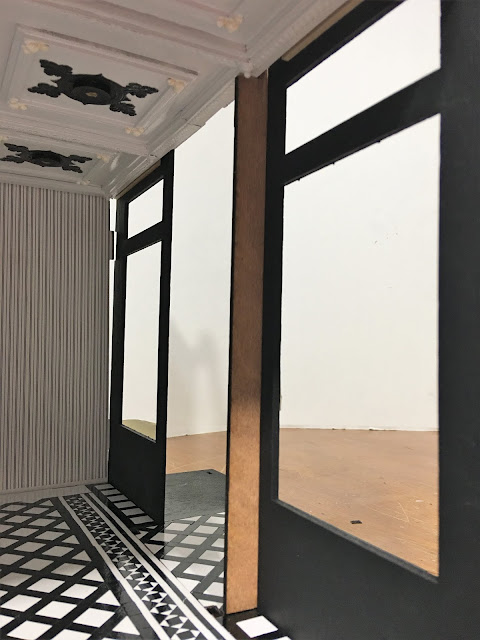 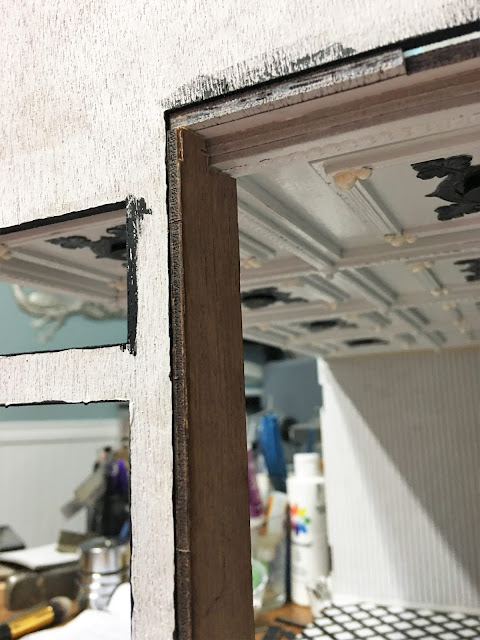 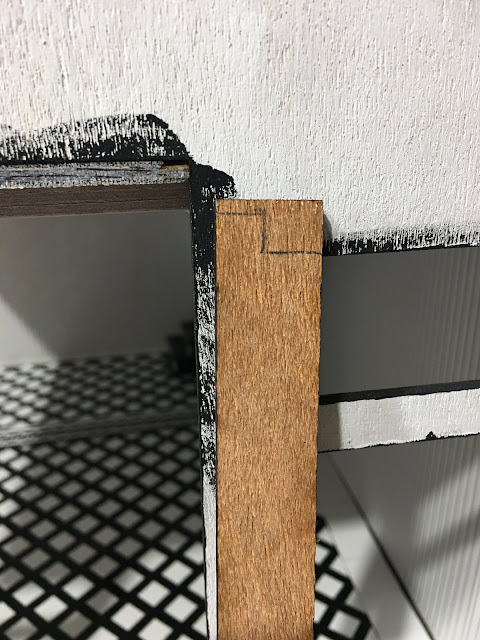 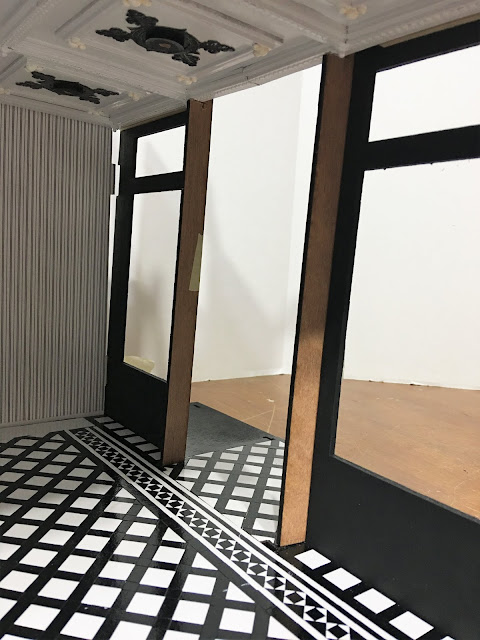 I sanded, painted then glued the interior window and door frames, deciding to go against the kit instructions and install the "glass" to the exterior of the shop rather than the interior. In fact, I decided to make my windows using 1/32" Lexan rather than the flimsy and very vulnerable acetate provided with the kit. How awful would it be to damage one of the weaker window panes after going through all the trouble to make them? Before I could get to that point, though, I had to make some decisions about front window decals...

I wanted to create an icon to use throughout the bakery on signs and packaging. Using Publisher, I combined shapes and lines to create a layer cake balanced on a tipping scale. The reason for the name "Pound Cake" will become much more obvious as the build moves forward.

I then imported that graphic into Cricut Design Space. I chose old fashioned lettering and viola -  Pound Cake's logo. These would be cut from vinyl and applied to the shop's front windows. 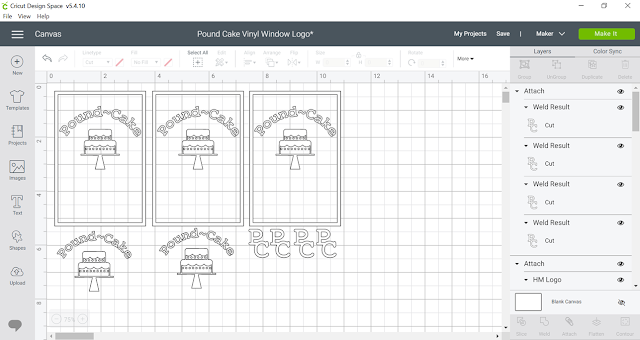 To see a great and simple tutorial on the entire vinyl process, click here:
Cricut Vinyl On Glass Tutorial

This photo shows the remaining vinyl after cutting and then "weeding" away the negative material. My little dots did not make it through the weeding process. They were so tiny and the backing paper so slippery that I had to finally, abandon them. 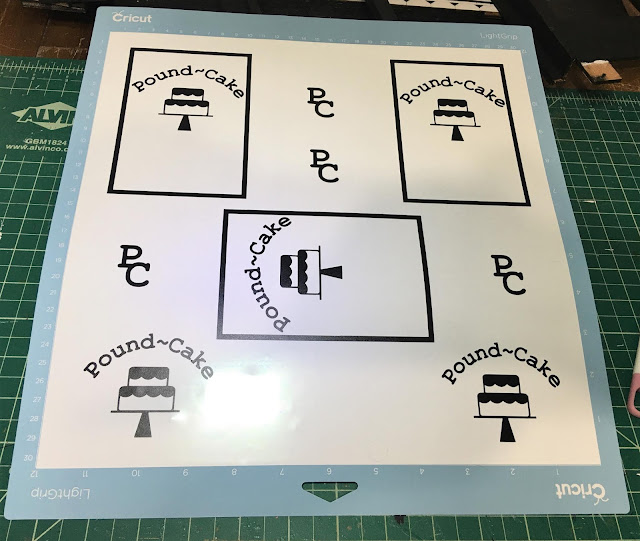 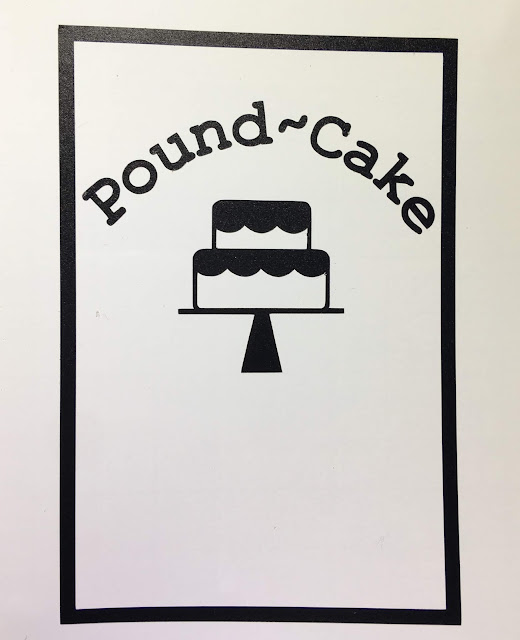 This photo shows what the vinyl looks like after the transfer tape has been applied on top. It's like packaging tape type material that picks up the vinyl. It comes on a roll so you can cut off the area that you need. 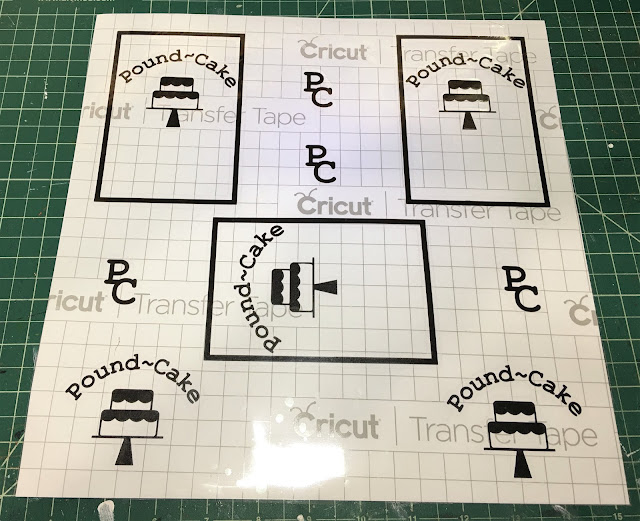 This is the decal applied with the transfer tape onto the pre-cut Lexan window pane. Trying to center it width wise and position it correctly vertically was a slow and steady process. I made sure to burnish it well with my finger to ensure the vinyl would stick well to the window. 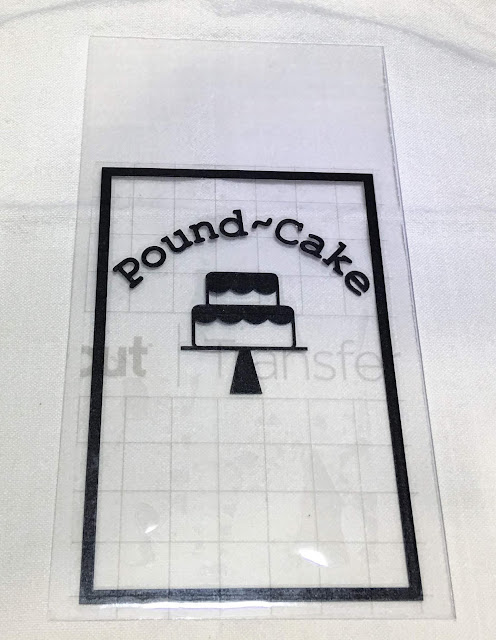 When you carefully peal away the transfer tape it leaves the decal behind. This too was a slow and steady process. 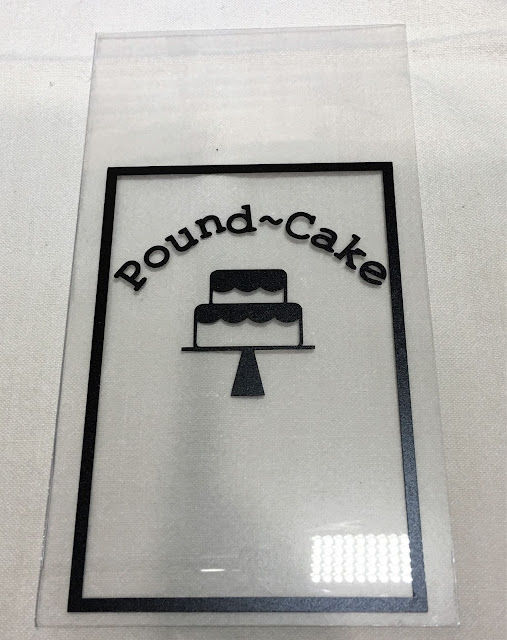 To sum up my vinyl experience, I found that the Cricut cut these small and intricate letters perfectly. I did take the video tutorial's suggestion to select "more" pressure in the settings window for the cut. Even the tiny dots on the cake icon were cut well. They were just too delicate to remove cleanly from the backing paper. Trying to then reposition them by hand and keep them spaced right and level would have been almost impossible. Maybe with more practice I will learn a trick to make it easier.

Here is the window pane installed into the exterior frame and being glued to the kit's front wall. Because of the 1/32" thickness of the Lexan, the glue also acts as window glazing, filling in gaps which paint completely conceals in the end. 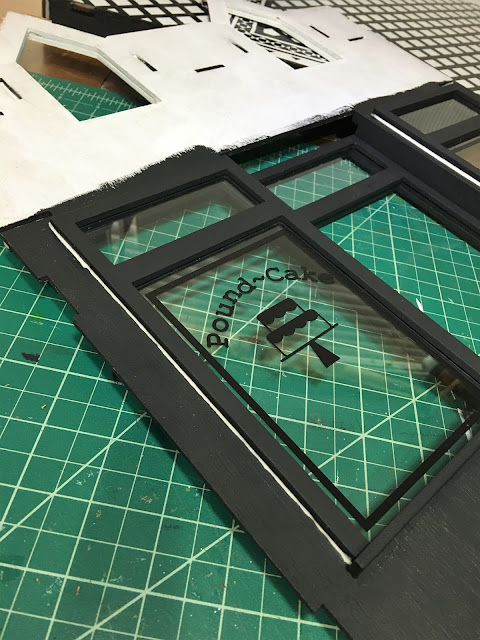 And in position. This whole "photographing black with a camera phone" thing is going to make me WORK! 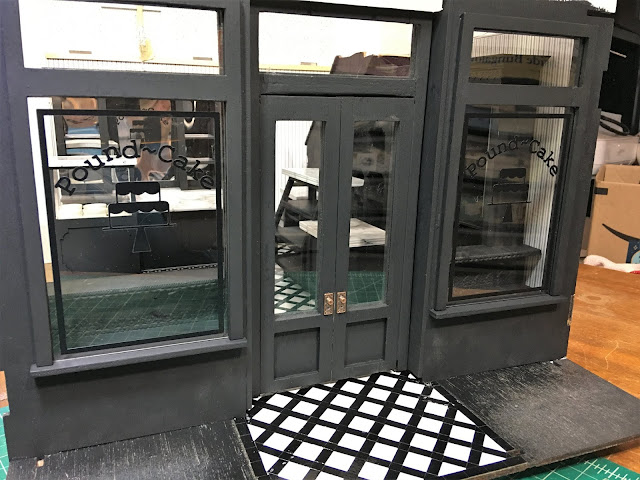 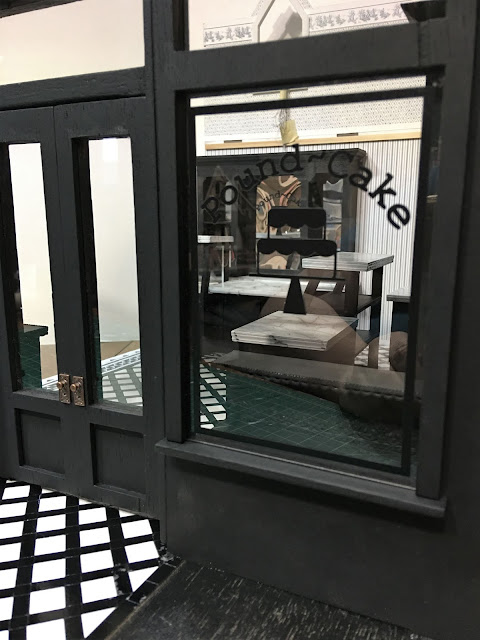 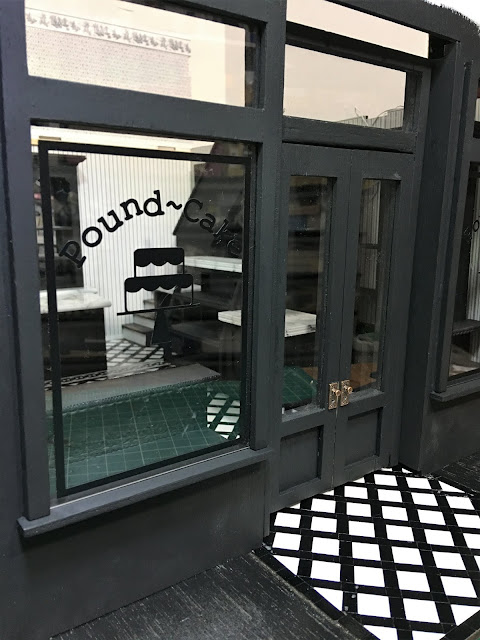 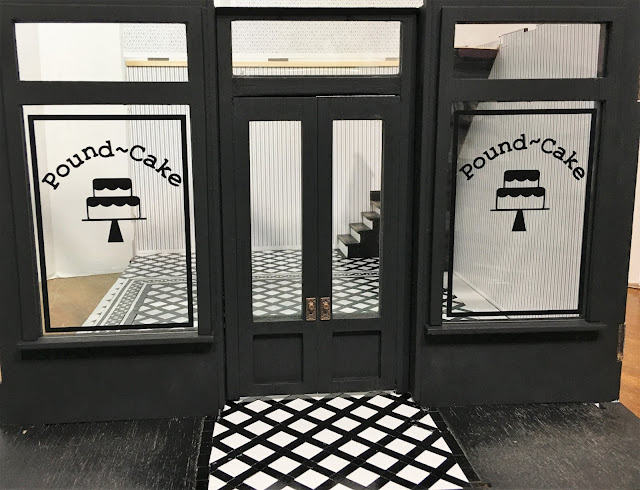 Inside view of backwards lettering... 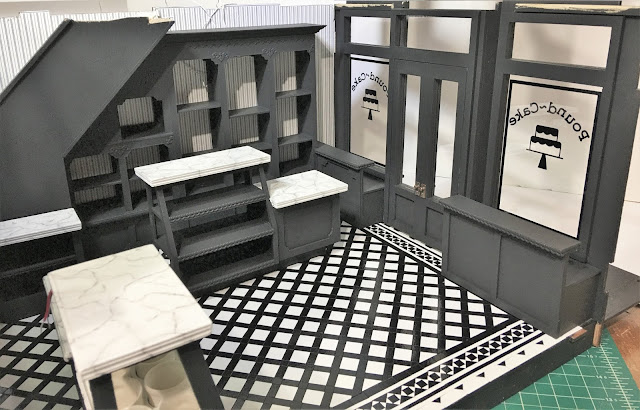 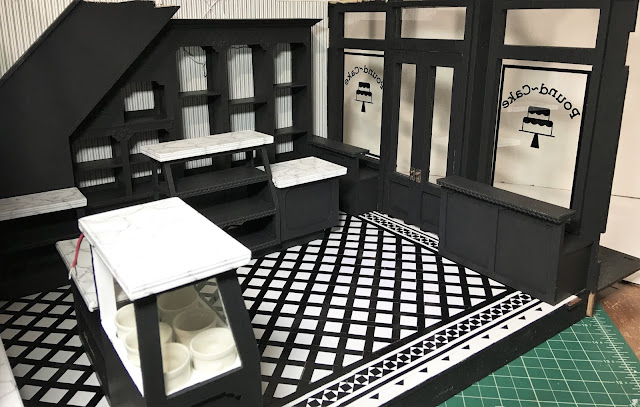 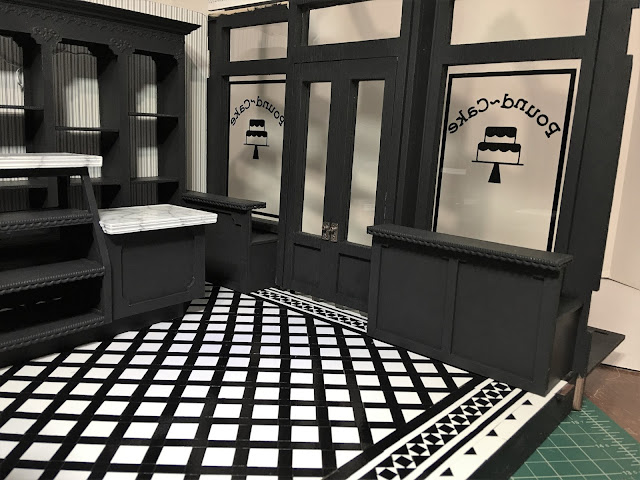 Here's one applied to the soda fountain back bar's mirror. 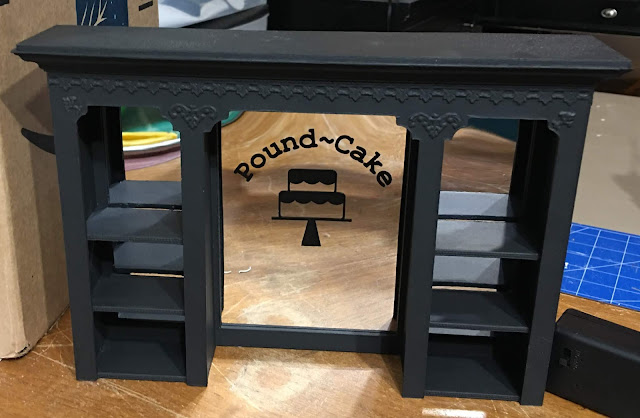 The entire vinyl procedure was delicate and fought with potential peril. BUT, as with most things in life, having a zen like focus and a surplus of patience made for a victorious ending! AND, isn't it fabulous that the Cricut has made lettering dollhouse windows a much realer possibility?!? Hooray for technology!

Now, with that same zen like focus, I intend to tackle that ceiling installation!
A little luck wouldn't hurt, either! Wish me some, will you?