When I last left you it was time to wrangle the ceiling into submission. Considering I had added about 1/4" in chipboard thickness to frame the coffers, it went pretty easily. Thank you all for the Wishes of Good Luck! I made several dry fits, shaving down tabs and opening up slots. There were a few more rounds of adjustments around the front door recess, too. But compared to the normal amount of sweaty wrestling with these kits, it was surprisingly cooperative. 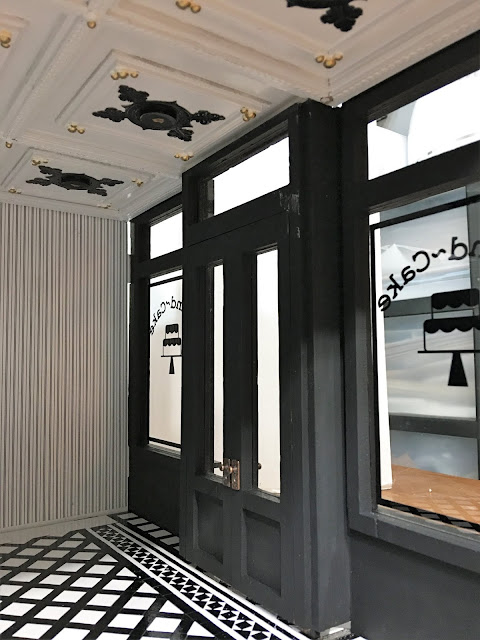 Once I had the glue applied, I clamped the walls to the center of the outside walls where the ceiling met them. I added heavy weights to the floor to help with the slight bow that still remained from pasting the ceiling paper with heavy gel paste. It seems to have settled with no more of a curve than the average old building has. Phew! That's a relief! 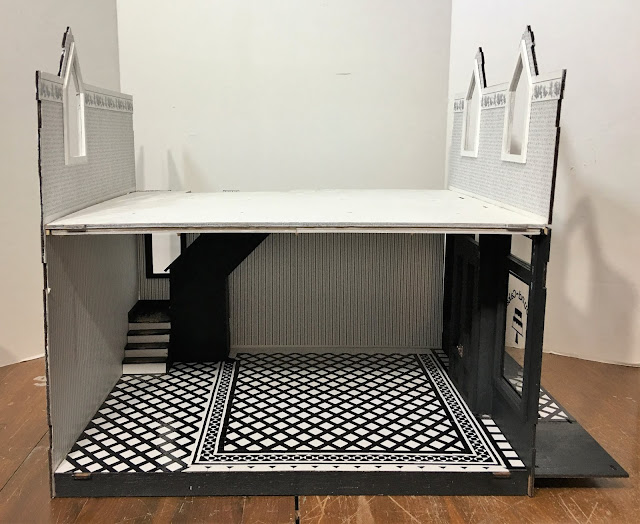 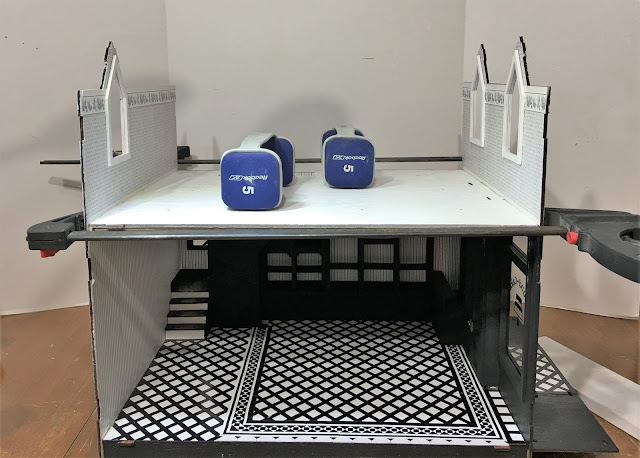 Next, I added crown molding and quarter round trim where the ceilings and walls met. I didn't manage to take a lot of in progress photos this week, so I won't be able to provide good before and after pictures. I apologize. You can see the trims in the later ceiling photo with the lights on. 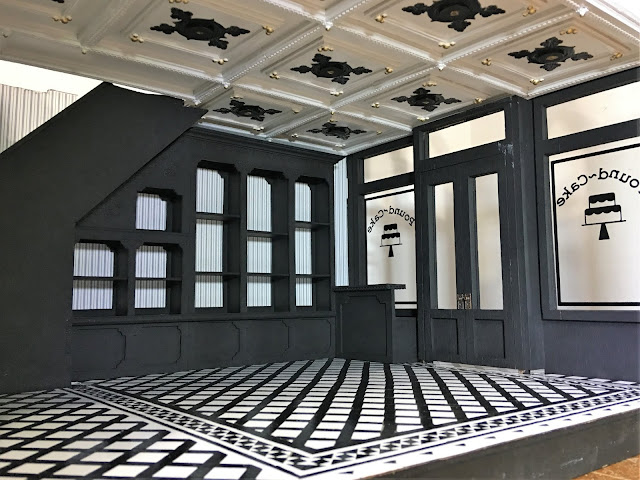 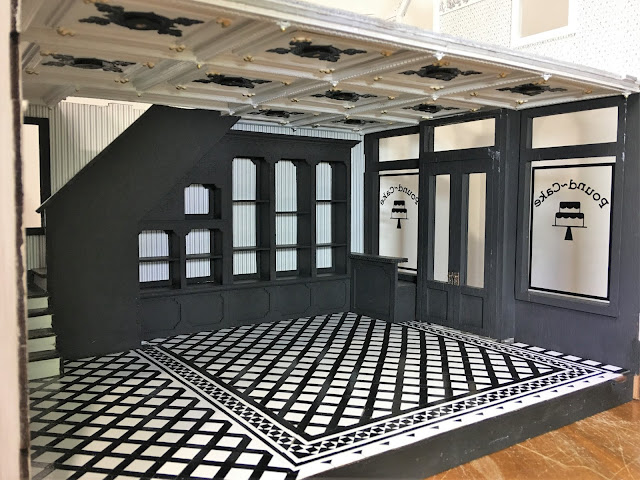 The next task was to prep all of the lighting kits. If you remember, I was going to use Chrysolite Zenith Hanging Lamp kits, This meant that I had to prep all of the pieces and then come up with a system to paint them. I wanted simple black fixtures to match the furnishings in the shop. 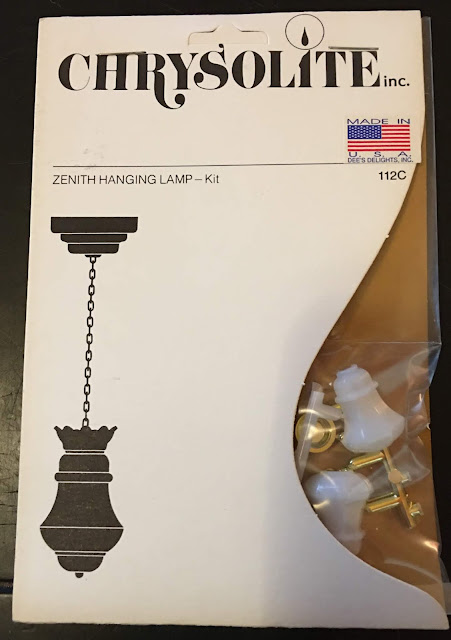 In prepping them, I discovered a huge problem. Both the 2mm chain and the wires from the bulbs would have to be threaded through the crown. The problem? The opening in the crown is less than 2mm. Not only would the provided 2mm chain not go through the opening, there was no way you'd get both the chain and the wires through without damage.
I know what you're thinking - Just make the opening bigger, right? Unfortunately, the crown is not a solid piece. It has 5 perforations with a tiny strip of plastic separating one from another (sorry no photo). To make the opening larger would risk breaking the piece altogether, and would interfere with the way the globe seats into the crown.
How about using smaller gauge chain? Smaller links also mean even less room to thread the bulb wires through. And having normal gauge wires right next to very delicate chain would mess with the scale illusion. What a bummer!

I suspect that this is why Brae opted to run her bulb wiring up through a pipe. And maybe why the kits were discontinued? 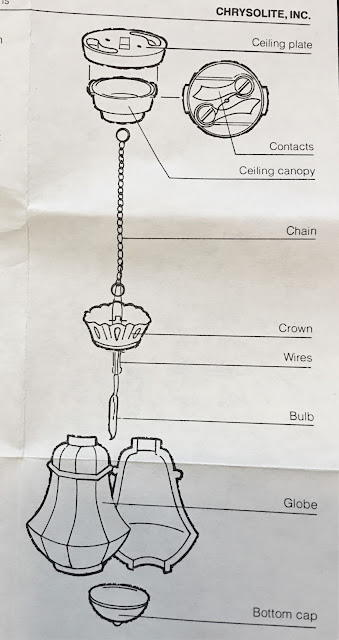 I opted instead to use all of the pieces to build a single ceiling fixture and eliminate the hanging aspect. I would still end up with an old time feeling fixture, it just wouldn't swing. This seemed safer, anyway, knowing I would have to reach my hands in and out of the space numerous times to decorate.  It was not what I originally envisioned, but I do still like them and feel it was a satisfactory compromise. You never know what challenges you'll run into building a dollhouse, or what creative solutions or compromises you'll have to make to move forward. Being flexible is a requirement. 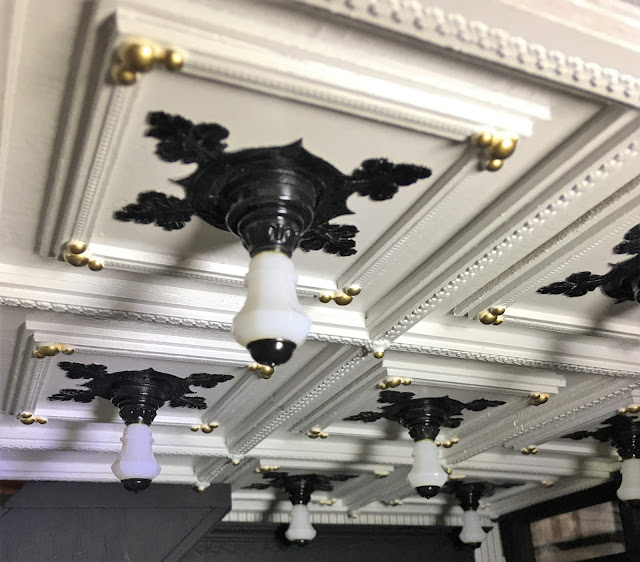 Problem solved, lights installed! Since these are all running off one nine volt battery for the testing, it will be interesting to see the amount of light given off when they are running on the transformer. 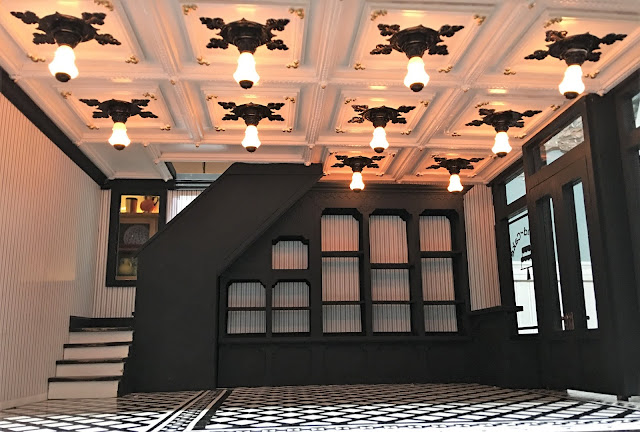 Another challenge to overcome was the first floor ceiling wiring, which by necessity, would be running across what will be the second floor. Even at less than 1/8" (the maximum thickness caused by bundles of wires which have been heat shrinked together), it will still cause a noticeably bumpy floor and interfere with future walls and furnishings if left unanswered. 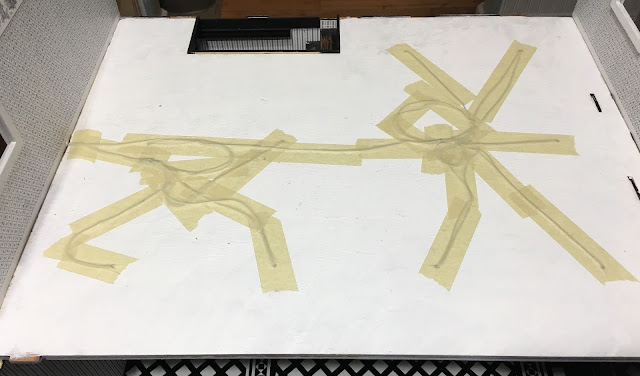 Solution: Make a subfloor with 1/8" trim framing to bridge over the wiring. First, I made a pattern of the second floor using printer paper and tape, then transferred that onto a sheet of 1/32" plywood. I did not have a sheet deep enough, so had to laminate a strip onto the main sheet. 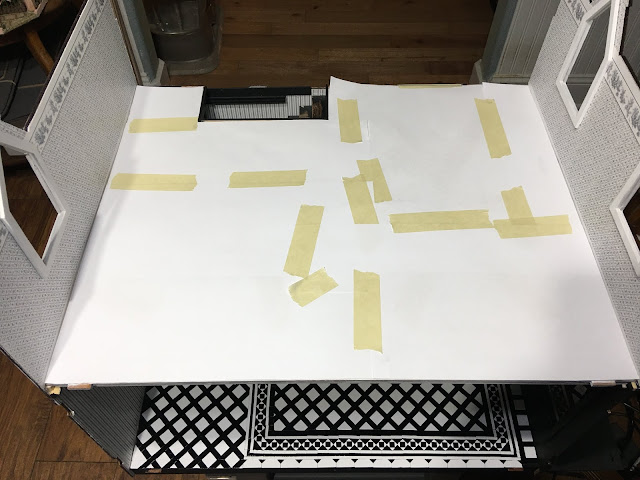 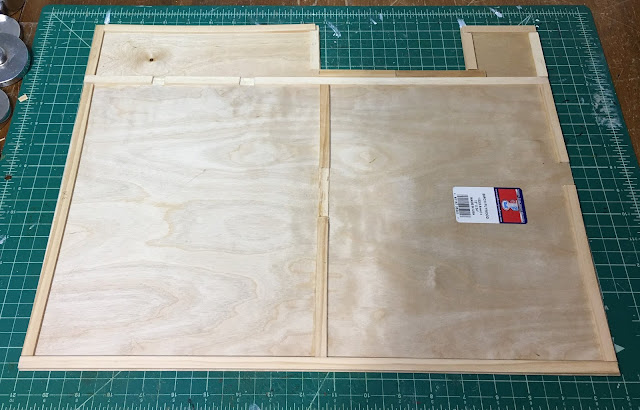 A little shave here and there and we have a perfect fit. 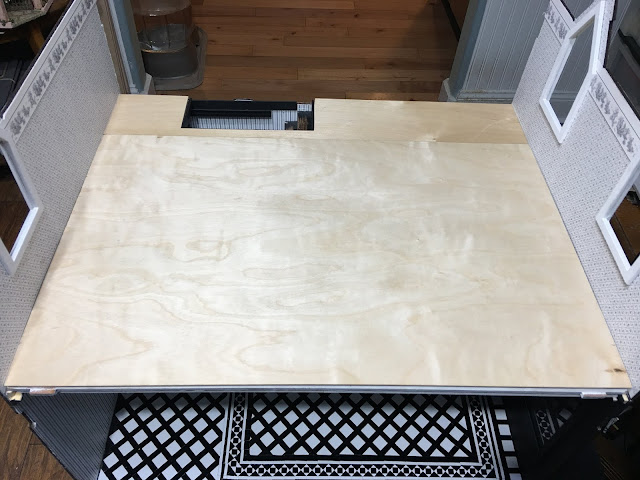 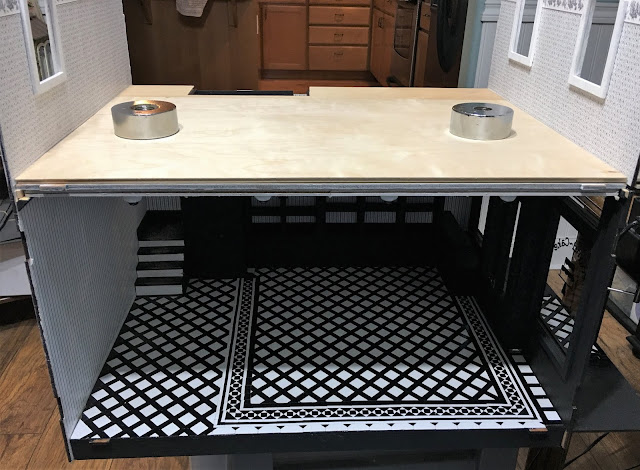 The next challenge might be a little harder than the ones I faced with the ceiling, lighting and floor. That's because the next challenge involves a decision, and those can be the hardest challenges to face! What kind of flooring do I want for the bakery's kitchen and what shall I make it from? That's going to require some thought and research. And probably a little trial and error.

Until next time, hope all your challenges are met with satisfactory solutions!